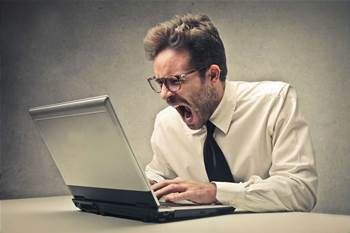 Australia's telecommunications industry watchdog experienced a jump in complaints about internet services over the past three months as end users struggled through service interruptions following an outage to the cable connecting Tasmania to the mainland.

The Telecommunications Industry Ombudsman reported 31,297 new complaints from consumers in the January to March quarter, 33 percent higher than the three previous three months.

It noted that the January quarter was traditionally its busiest period but the start to this year experienced a "sharper than usual increase".

The TIO attributed the rise to more complaints about internet services; 10,985 new complaints of the 31,9297 related to slow data speeds, unusable services and connection delays.

The proportion of internet complaints hit 35 percent of overall complaints in the quarter, compared to 26 percent in the same period last year.

"These three issues were the top reason that brought internet users to the TIO in January-March 2016," Ombudsman Judi Jones said in a statement.

In early March, Basslink cut its data cable to enable it to repair its adjacent faulty electricity cable that had shuttered services to Tasmania since December last year.

However, a failure to switch enough capacity over to Telstra subsea cables meant customers of the TPG group experienced significantly degraded internet speeds until TPG brokered a last-minute deal for capacity with Telstra.

The TIO said it was unable to attribute the increase in internet service complaints to any single factor.

The watchdog also reported growth in complaints about landline services.

The proportion of landline complaints - 9248 in the three-month period - grew from 28 percent to 30 percent of overall issues reported to the TIO. Consumers similarly reported problems connecting to and using their service.

Complaints about mobile services, however, fell from 46 percent of overall complaints to 35 percent. The TIO received 11,064 reports of issues with mobile services in the quarter.

It noted that the ratio of mobile service complaints had fallen by 48 percent over the past four years, while services in operation had increased by over 8 percent.

Overall, while total complaints grew by almost 33 percent on the December quarter, the TIO reported a 5.6 percent drop compared to the same period in 2015.

"Complaints are continuing to trend down," Jones said.