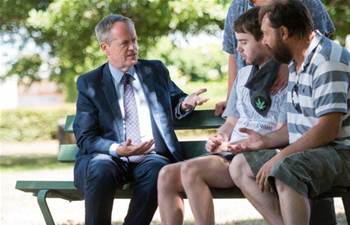 Federal Labor has further politically weaponised the Department of Human Services’ controversial Robodebt program, launching a crowdsourcing website to create a new catalogue of complaints and errors it can sheet back to bureaucrats and the government, as it tries to get the automated revenue recovery machine junked.

Revealed on Friday by Shadow government services minister Bill Shorten, Labor’s new site threatens to be a substantial new irritation for the government’s efforts to recast Human Services into Services Australia because it will create a dedicated pipeline of ammunition to fire at the department and its minister Stuart Robert.

Labor’s crowdsourcing tactic builds on the success of the #NotMyDebt site that lets welfare clients publicly vent their issues with Centrelink online and across social media without revealing their identities.

However, unlike #NotMyDebt, Labor is asking people to both identify themselves and their issues, but will not make the issues public unless it first obtains permission, opting instead to use the Parliamentary system to lob a raft of well-known defects into the House and then back on the desks of mandarins and ministers.

Official correspondence minders will be thrilled.

If successful – and it is likely to be so – the tactic will create a fire hose of official complaints that can be pushed to elected representatives, a second avenue to the now infamously slow customer service channels of Centrelink where users have spent hours on hold, assuming they get through.

At the same time, Labor will have visibility over departmental response times to issues, opening a new avenue for attack through Question Time, committees and the Senate Estimates process.

“The Government is deliberately obstructing and stonewalling Australians who are trying to highlight problems in the robodebt system,” Shorten said.

“When confronted with entrenched problems in the debt compliance scheme Government Services Minister Stuart Robert says people need only go into Centrelink to clear up any discrepancies.

“This is not the experience of many, many Australians.”

The Morrison government has vowed to modernise and improve Human Services by recasting it Services Australia, a move the PM said borrowed from the success of Service New South Wales.

Also being borrowed is the former Secretary of the NSW Department of Finance, Services and Innovation Martin Hoffman who has been plucked to spearhead the development of a new strategic plan over six weeks for Services Australia.

A seasoned senior executive of both the federal bureaucracy and digital media industry, Hoffman is renown for a laser focus on execution in service delivery, the area where NSW successful rehabilitated customer facing services that had become ossified under the previous government.

While an overall service lift, shortening transaction times and reducing touch points will undoubtedly be a priority for Hoffman, debugging Robodebt could also soon be in the mix if Labor’s tactic of automated online complaints collection succeeds.

Ironically, there seems to be some political consensus around the accuracy of the Robodebt system emerging, with the success-to-error ratio landing at around 80:20.

That figure suggests that there is still enough cash at stake for the government to continue to pursue recoveries, despite the blowback that will undoubtedly continue.

“With an error rate that even the Liberals admit is at least one-in-five and innocent people being hounded by the Government for money they don’t owe, the ducking and weaving has to stop,” Shorten said.

Whether Hoffman’s strategy can reform Human Services to point where it is not overpaying people because of latency, inefficient processes and data matching based on old or incomplete information is now the question.