Samsung's '5G' still a while away 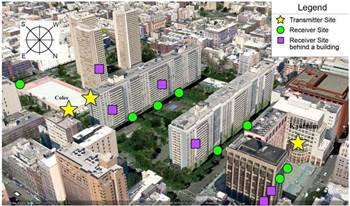 Samsung today announced a '5G data break-through', but the foundations underpinning the wireless technology are still a long way off.

The South Korean giant said it had carried out tests on wireless data transmission using microwave spectrum, and had reached more than one gigabit per second.

More significant than the speed reached is the use of the very high frequencies in the trials. Samsung achieved the speed using the 28 Gigahertz, which has very short reach or propagation compared to the 3G and 4G 850, 900, 1800 and 2100 MHz spectrum currently used in commercial network deployments.

Samsung acheived the reach with an adaptive array of transceivers, with 64 antenna elements. The company claimed that once commercialised, such technology would be capable of "ultra-high-speed data transmission up to several hundred times faster than even the 4G LTE-Advanced technology due for launch later this year."

While 5G has not yet been standardised, 4G-based LTE-Advanced has been deployed commercially by Russian telco Yota in Moscow. Yota claims 300Mbps speeds with its LTE-A network, although it is yet to offer retail devices.

Earlier field trials by Japan's DoCoMo have shown LTE-A capable of 5Gbps downloads with 100MHz bandwidth while moving at 10kph.

The spectrum used for the trial isn't millimetre wave as Samsung states, but rather the microwave variety and which is mostly set aside for a largely forgotten technology, the Local Multipoint Distribution Service or LMDS, devised in the late 1990s.

LMDS promised high-speed wireless broadband mainly for digital television with a reach of two to three kilometres as fixed point to point service, based on the asynchronous transfer mode (ATM) concept, though Ethernet variants were also available.

Depending on the implementation, LMDS offered anywhere from 155 megabits per second to asymmetric service 1.5Gbps/200Mbps downloads and uploads.

Could such high frequency bands be used for mobile communications as Samsung hopes? For starters, the bands in question may need to be reorganised and many are in the hands of existing licensees.

In Australia for instance, AAPT successfully bid for 29 LMDS rights in the 29 to 31GHz bands, paying $66.2 million in 1999. The telco is using some the frequencies currently, according to the ACMA licensing registry.

"A millimetre wave service could be 99.99 per cent reliable over a six kilometre path in San Francisco, but in Miami you'd only get that reliability over two kilometres," Brewer explains.

Even though 99.99 per cent availability sounds high, Brewer said it still means nearly an hour of downtime a year due to rain. Also, that downtime is likely to occur as tens or hundreds of micro-outages a year, he says.

"On the face of it, millimetre wave doesn't seem like a good choice for mobility. If your phone dropped out every time the rain picked up, you'd bin it," Brewer said.

There is a way around the issue of signal attenuation and dropouts due to rain, Brewer said. Called carrier aggregation, in the LTE-A standard a phone connects to cellular base stations at multiple frequencies.

Lower frequencies that are more reliable will be used to keep calls alive, and to move the most important data, according to Brewer.

Higher frequencies such as millimetre waves will be used for best-effort services, applications that require high bandwidth.

"Given the robustness of mobile protocols, I think carrier aggregation will give millimetre wave radio a real place in cellular networks," Brewer says.

Other workarounds for rain fade include small cell sites with 200 metre radius. A Samsung sponsored research paper from the Polytechnic Institute of New York University described a successful trial using 75 receiver locations with small electrically steerable high gain antennas at a site in Manhattan being able to deal with heavy rain, suffering just 1.4dB attenuation at 28GHz and 1.6dB at 38GHz.

Otherwise, signals in the 28GHz band would be attenuated by 7dB per kilometre in 25 millimetre per hour of heavy rainfall. Coastal Australia is in ITU's F band, with 28 mm/h rainfall to be engineered for, meaning signal attenuation is potentially higher.