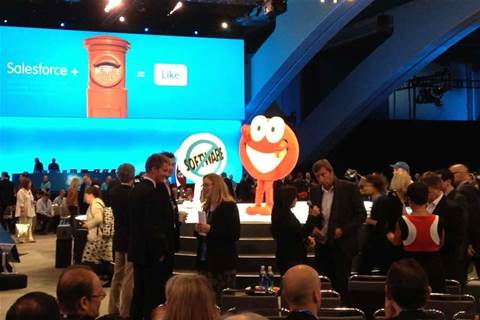 Salesforce mascots at the Dreamforce 2012 keynote.

Chatterbox, introduced at the vendor's Dreamforce conference overnight, would become available for pilot in the first half of 2013.

It was positioned as “the Dropbox for the enterprise”, with Salesforce offering to store customers’ files — including contracts, financial reports and product roadmaps — on its cloud platform.

The platform is hosted on Salesforce.com data centres in the US, Japan and two operated by Equinix in Singapore. Salesforce.com has yet to establish a facility in Australia.

Salesforce.com co-founder Parker Harris highlighted how staff of airline Virgin America could upload personalised flight plans to Chatterbox via a folder on their desktops, in a similar method to using Dropbox, Microsoft’s SkyDrive, Google Drive and Apple’s iCloud.

The files would be stored in the Salesforce.com cloud and posted on Virgin America’s Chatter network, to be shared with colleagues in other airports and with customers in-flight.

“Why is there not a Dropbox for the enterprise, running on a trusted platform — running on a Salesforce platform,” Harris asked the conference, which had 90,000 registered attendees.

Analysts at the conference described Chatterbox as a logical next step for Salesforce.com, although some questioned its decision to build a new service instead of extending its partnership with enterprise storage service Box.

Chatter was used in Australia by the National Australia Bank, Commonwealth Bank, Dell and Vodafone.

Salesforce.com used the opening days of the Dreamforce conference to rebrand some of its key products.

Salesforce.com also rebranded its Social Marketing Cloud — initially powered by its acquisition of social media monitoring service, Radian6 — to simply Marketing Cloud, on the back of its more recent Buddy Media acquisition.

Although the suite was officially launched today, Salesforce.com said the technology had already reached 55 percent of Fortune 100 companies and the Commonwealth Bank of Australia.

CommBank used the suite to monitor and analyse social media posts about the bank, publish targeted advertisements on platforms like Facebook, and measure the return on investment of its advertising campaigns.

Chief marketing officer for the bank, Andy Lark, likened trusting Salesforce.com with its data to how CommBank customers trusted it with their funds.

“Our relationship with customers is reasonably straightforward: you give me something you don't even trust yourself with, that you really value, and I promise to give it back to you at any point in time, in a better state than you gave it to me in," he said.

"It's a similar thing with Salesforce; you give me your most precious asset, which is your customer data. I promise to look after it better than you can and I will give it back to you with insights wrapped around it and connect it to social."

“Because social wasn't fully endorsed by the organisation ... even though we had seen a lot of noise on Facebook and Twitter, we weren't able to go live on the channel until official [communications staff] gave us the official comms to post on the channel," he recalled.

"Meanwhile, the ATMs started spitting out free cash and it went even more viral. By the time we started to engage on Twitter and Facebook it was way too late.

"Since that incident, social is now the channel that we go to first for issues management and listening. Instead of waiting, we now go there and say, 'we know something's happening; bear with us, sorry'."