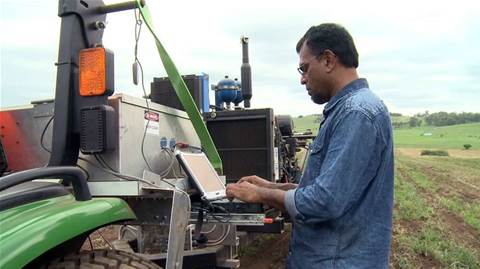 Planting and weeding with precision.

The process of planting, weeding and harvesting crops is getting closer to becoming the domain of robots and drones rather than humans, following a raft of new developments in Australian robotics.

Researchers at the University of New South Wales this week revealed their invention of a robotic tractor and seeding machine, which they claim has unprecedented planting accuracy.

The tractor can plant seeds without a human operator, and is an improvement on earlier models thanks to advanced control systems and sensors.

“This system has the ability to lay seeds within one to two centimetres of lateral accuracy on rough agricultural terrain, which is an unprecedented level of precision for an autonomous machine,” said Jay Katupitiya, associate professor in the School of Mechanical and Manufacturing Engineering at UNSW.

Measuring three metres wide, the machine is also lighter than other tractors, and as a result doesn’t leave crop lines, enabling cropping on 20 percent more land, according to the inventors.

The invention comes on the back of a $3 million Queensland Government funding boost for QUT, which was granted the money in this week’s State Budget to help develop its “AgBot” weed spraying robot.

QUT farm robotics head Gordon Wyeth said robotics would play a big part in helping Australia transform its agriculture sector into one that was globally competitive.

“We estimate that robots would save the wheat industry alone $620 million per year just in relation to weeding,” Wyeth said.

The AgBot is a golf-buggy sized robot that uses sensors to target young weeds, thereby reducing the amount of spraying required on a property.

Wyeth said the funding would be used to develop solar-powered farm robots fitted with technology to provide critical information to farmers.

"Robots will be able to tell farmers how ripe their crop is, for example, and this will be of great assistance during planning of the harvest," he said.

It’s a reflection of the maturity of robotics technology that it is entering domains it previously hasn’t been seen in, said Toby Walsh, artificial intelligence expert and research leader at NICTA.

“Robotics is going out of where it has been on the clinical factory floor, where everything is controlled, and now you’re getting it literally out in the field.”

Walsh said computing power and the ability for robotics to cope with uncertain environments was seeing more activity in low-cost sectors like farming.

“There’s been quite a bit of success especially in Australia in getting robotics into mining, but mining is of course a very wealthy business and they’re prepared to throw a lot of money at it.”

“There are a lot of accidents in the farming industry. Actually automation promises, properly managed and thought through, the hope for actually reducing some of that.”

Walsh said it was already possible to build a farm that could run itself, but argued it was more general IT, rather than robots, that would deliver cheaper and easier wins to the farming sector.

“It’s a very low-tech industry when you look at it. Information technology has been slow to change it, but the prospect of some very simple things in the IT sphere can change the efficiency of farming without putting robots in the fields.

“Just giving farmers better data and helping them work out when and where to plant their crops and manage their crops.”

Still, Walsh said, with more robots in the field will come more data.

“That’s going to be a bonanza for machine learning people to say (things like) ‘We know which is the best way to use your limited water supply to maximise your crop yields’.

“Farmers have worked a lot in the dark.

“A good farmer has got the experience and the expertise and years to know what to plant.

"The difference you can really make is on the person who is perhaps a little less experienced. His or her expertise can be lifted to the level of the expert with technology and a little bit of IT help.”