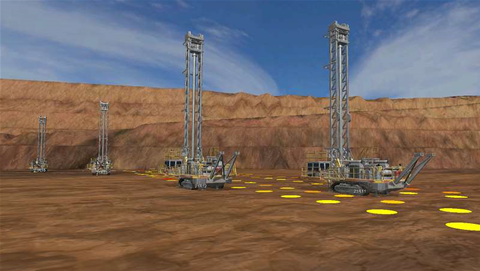 Rio Tinto is shaping to generate up to half a million dollars of value each year from a long-term investment in a system that provides a rich 3D display of the pit environment at its mines.

The RTVis system, first reported in iTnews in 2012 and trialed under the project name 'VirtualEYES' since early 2013, has now been operational in Rio’s West Angeles iron ore mine for 12 months and is under trial in copper, diamond and other mining operations on a global basis.

RTVis was inspired by human-computer interface work pioneered at MIT and developed in-house at Rio Tinto under the leadership of Rio Tinto’s Head of Innovation John McGagh.

The 3D modelling tool allows Rio Tinto staff working from the comfort of the miner’s remote operations centre in Perth to visualise a summary of data fed into the facility from thousands of sensors in mines 1500 kilometres away.

The tool allows the large volume of data generated in real-time from autonomous trucks, drills and other plant to be visualised by remote analysts, allowing them to relay faster instructions back to the pit.

As seen in the illustration below, RTVis offers human visualisation for the complex information in Rio Tinto’s ‘Mine Automation System’ [MAS].

The MAS tracks everything from the movement of trucks, the position of drills and other plant and the changing geometry and geology of the mine surface. This information is used to plan and schedule work and to execute on those plans by sending commands back to equipment operating in the field. RTVis is described as being akin to a gaming engine that sits atop this very complex, real-time database to help humans interpret what's happening on the ground. 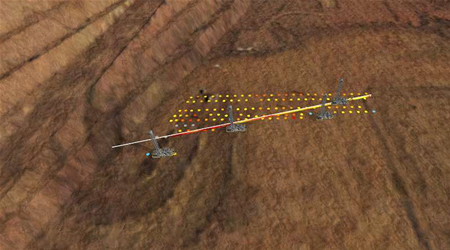 Some 25 percent of Rio Tinto’s truck fleet are autonomous. The miner defines autonomous as machines that are able to act as sensors in the field and be tasked with jobs from remote operatives based on that data. 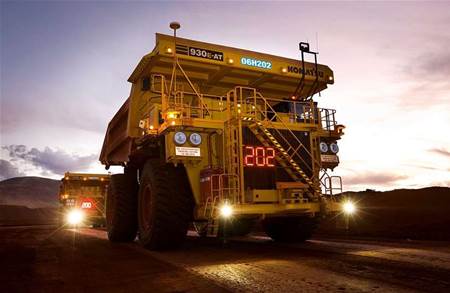 There are close to 200 sensors embedded in each of these vehicles to feed information about both the vehicle and the terrain it is working back to the remote operations centre. Using RTVis, analysts can drill down into its position, its payload, current speed, fuel status, maintenance status amd who is driving it.

Autonomous drills, meanwhile, send information back to the remote centre that - when combined with survey data and what other geologists know of the terrain - can also be acted upon. Remote analysts can use this information to better determine, for example, where there is likely to be ore versus clay [see image below], and send this information back to a dozer operator on-site to fine tune the dig. 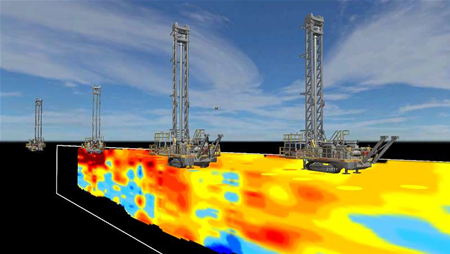 The mining company has revealed that it took four years of investment in the ‘Mine of the Future’ program to achieve a positive ROI. For the last three of the project's seven years, that patience and investment in R&D has started to pay off in Rio’s favour. Today, Mine of the Future delivers a yield against the original investment of between 3:1 and 4:1.

After the first year of its use, the miner claims that the RTVis component of the system is driving between $350,000 to $500,000 of incremental value a year via the extraction of additional ore and minimising of waste.

John McGagh, Rio Tinto’s Head of Innovation sees the Mine of the Future program as satisfying the three commonly-cited characteristics of ‘big data’ - volume, velocity and variety.

“We have an abundance of volume, velocity and variety of data in our industry - more than we can poke a stick at,” he said. “We drill a million blast holes a year into the Pilbara. Each one of those is an opportunity to get more data, We can never know enough about the ore body.”

The speed of data transfer across Rio’s leased fibre networks means that real-time data of pit operations can be accessed within 0.1 of a second from anywhere in the world.

Pragmatism rules, however, in applications where the real-time for a copper concentrator might feed in some 80,000 pieces of data per second.

The volume and velocity of the operational data the miner collects has required its engineers to make prudent choices about where to store and process the data, and how to send it there.

A balance has to be struck between how the miner processes the stream of operational data required to make decisions in close to real-time versus how it might process historical data in far larger volumes to finesse its longer-term processes.

Operational data that informs day-to-day decisions tends to be processed as close as possible to the source of data generation on Rio’s network.

Rio has made a conscious choice not to own the IT infrastructure required to crunch larger, historical data sets, as oil and gas companies tend to do. The volume of seismic data crunched in oil exploration tends to add up to petabytes of data, while miners can get away with processing at the multi-terabyte level.

These jobs tend to involve the upload (or physical ship) of a large data set to a third party cloud, taking advantage of the cloud provider’s economies of scale, and promptly deleted once a result has been achieved.

The result the miner is looking for is, in most cases, nowhere near the volume uploaded - often taking the form of an algorithm that can be used to further improve processes.

During exploration, for example, Rio combines ‘big data’ and cloud computing to upload exploration data and narrow the range of sites it might consider drilling to those that are most likely to deliver a maximum yield.

The batch processing of historical data from automonous vehicles, as a further example, would aim to perfect the algorithms used in control systems that determine when a piece of equipment is most likely to fail, aiding the scheduling of prevantive maintenance activities.

Rio Tinto plans to increase the number of autonomous vehicles and equipment on its mining site as advances in the power of compute, the cost of storage and availability of network bandwidth improves.

McGagh said it “won’t be long before other parts of the mine, like dozers, are also an autonomous tool.”

But decisions have to be made on where to prioritise automation according to where the most value can be gained, he said. For that reason, autonomous digging, for example, might be some time off yet. It’s difficult to imagine a future where no workers are required in the Pilbara, he said.

“You will always need people up there.”