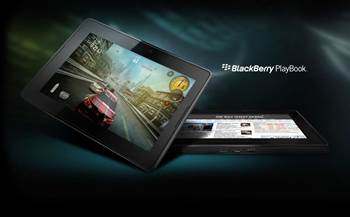 Available within a fortnight.

Research in Motion has announced plans to sell the PlayBook tablet in Australia from 20 June at a starting price of $579.

The company will sell the WiFi-only devices with 16 GB, 32 GB and 64 GB storage respectively from retailer Harvey Norman.

The device will also be available from mobile carriers Telstra, Optus and VHA.

Users of the tablet will require a BlackBerry handset to be able to connect the PlayBook to a mobile network.

This could open the possibility that telcos would bundle BlackBerry plans with the PlayBook to encourage mobile data and secure email use on the tablet device.

Representatives from VHA and Optus were tight-lipped when queried on this possibility today.

Telstra was unable to respond at the time of publication.

The tablet received mixed reviews when it launched in the United States in April.