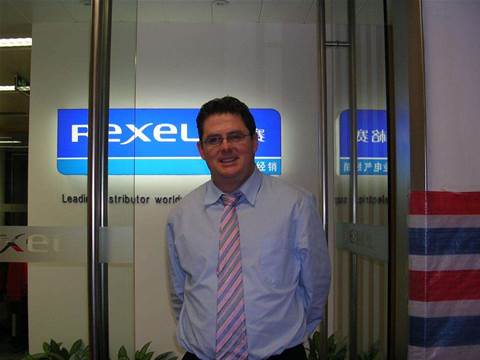 Electrical products distributor Rexel Australia plans to embark on an IT transformation project worth "in the ballpark of $12 million" over two years that will see it refresh back and front-office systems and seek to reposition IT as a strategic partner to the business.

The company, which operates a network of 186 branches for trade sales of electrical parts Australia-wide, will kick off the first phase of its transformation (internally dubbed 'Project Orion') this week after taking receipt of the first Oracle Exadata X2-2 database machine to be shipped to Australia.

The X2-2, announced at this year's Oracle OpenWorld conference in September, is a pre-configured rack of hardware and software optimised to run Oracle's database software.

"I'm looking forward to seeing the box and giving it a hug," Dawson said. "I'll walk away from it from that point on."

The company had previously run its database environment on "big, monolithic Sun boxes" that were configured by the IT department. Dawson hoped that such an effort wasn't necessary with the X2-2.

"To the disappointment of my guys, they won't get to build [the new system although] they've shown the capability [to do it]," Dawson said.

"I know my team and other vendors can build it," he said. "But when you look at the numbers, the risk profile and the pre-configured nature of dropping it in and within a week being able to run the test and dev environments for Orion" it was far more compelling than if the company was "doing the racking ourselves."

"It would mean months of configuring," he said. "I've been in racking environments for six years, but there is an effort in getting them going. Yes, it's sexy playing with the boxes but from a business perspective that adds no value."

The company had purchased a 1/4 rack sized Exadata system and would likely upgrade to a 1/2-rack in the future. Oracle touted the scalability of the X2-2 as key selling point for the product.

"We have the ability to scale without having to buy [all the capacity] now," Dawson said.

He said that the cost of buying a configured and optimised box would overtake the cost of doing the hardware configuration themselves "within two years".

Adding value was a key theme for the transformation.

Dawson joined Rexel just over two years ago at a time when IT was the "lowest performing division of Rexel" and was "failing the business". Rather than valuing the contribution of IT, he said, it was viewed as a "necessary evil" because the company had a branch network.

"The fact was they'd under-invested in IT," he said. "Things were left until they were broken."

Dawson immediately set about "stabilising" the core systems, insourcing systems and establishing an internal IT team to look after them.

He led the push to refresh PCs once their three-year warranty period was up (rather than "repairing old junk and putting it back out")  and set about convincing Rexel's financial powers-that-be to back him on Project Orion.

The early work saw the cost of IT drop from 0.85 percent to 0.75 percent of Rexel Australia's revenue - and "quantum leaps in the level of service" that IT was able to provide the business.

Dawson hoped to build on that with Project Orion over the next 22 months.

The transformation would see Rexel refresh the hardware underpinning its Oracle E-Business Suite implementation (running on Exadata) and app servers (running on Dell hardware), upgrade E-Business Suite and eventually migrate 76 branches in New Zealand - and a host more in Asia - onto the new "front and back office target architecture".

The transformation would also streamline the point-of-sale, where querying the central database for a customer's records would be shaved from minutes to seconds, Dawson said - something he believed would earn the IT department "immense kudos with the business".

Dawson also said the IT department hoped to institute a culture that allowed the business to "take advantage of new technology sooner".