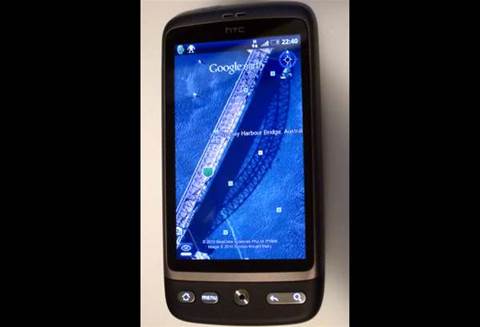 The features Telstra didn't want you to see... just yet.

After some tinkering, HTC Desire owners have found they can copy installation files from Android phones sold in the USA onto their HTC Desire with relative ease, thereby enabling Voice Dictation, Turn by Turn GPS navigation and installing Google Earth for Android - all of which are not officially available for download within Australia at present [see photo gallery - top right].

Google Android smartphones are more easily customised than other smartphones, leaving the door open to enable "hidden gem" features that have been disabled or left dormant by the mobile operator, phone manufacturer or local Google subsidiary.

Mobile phone manufacturers, operating system owners and mobile operators (in this case HTC, Google and Telstra respectively) are very cautious when releasing new handset or mobile network features - because they want their user experience to be rock solid and reliable.

Manually enabling hidden features allows a user to realise the full potential of their Android smartphone now - without having to wait an indeterminate time for the mobile operator or Google to announce that they have enabled a "new" Android smartphone feature -  a feature which has been available in the USA or Europe for some time and lying dormant in Australian versions of the device.

Last Friday. Telstra and HTC released a software update which fixed GPS issues with the HTC Desire and announced that a new Voice Search feature had been added. Voice Search has been available on older Android smartphones since February 2009.

A Telstra spokesman emphatically stated that it was definitely not their strategy to "drip feed features for the HTC Desire" over time, as that would cause complications and take a lot of time to test each new release between the different parties involved (HTC, Google and Telstra).

HTC agreed with its telco partner, telling iTnews that the device manufacturer is "constantly seeking to deliver the best customer experience with regular software updates.

"This update was a great opportunity to deliver an additional feature and functionality [voice search] to our HTC Desire customers," the HTC spokesman said.

Weighing up the pros and cons

Enabling features that your local carrier hasn't yet supported can bring about some support and stability problems - so users have to weigh up some significant risks.

Testing the previously-dormant functions, iTnews found them to be very useful.

Google's Android voice dictation feature is very handy. Many people find typing an SMS or the body text of an email using smartphone touchscreens slow and prone to typing errors. The voice dictation feature saves time by allowing you to type notes into your phone with one button press, using the vast speech to text database Google has amassed over the years through it's free USA phone directory assistance service and Voice Search applications on Android, iPhone and Nokia phones .

Voice dictation into any Android text entry box was launched four months ago as one of the strengths of the HTC Desire's cousin, the Nexus One smartphone.

The hardware inside the HTC Desire and Nexus One is almost identical and the enabling of voice search shows that the HTC Desire has speech to text capabilities.

A HTC spokesman defended the decision to leave this feature out for the moment.

"During the test phase for HTC Desire we found that there were compatibility issues with the Voice to Text feature," the spokesman said. "This is something that we're interested in offering customers and HTC is currently exploring ways to introduce this feature".

Similarly the release of Google Earth for Android as well as free turn by turn GPS functionality for Android smartphones in the USA  UK and Ireland was greeted warmly by reviewers, but it is uncertain when these handy features will ever be officially launched in Australia.

A Google Australia spokesperson told iTnews  that Google Maps Navigation (Beta) "is currently only available in the US, UK, Ireland on phones that run Android 1.6 and higher.

"We understand this service is valuable to users around the world, but we don't have a roadmap to announce at this time. At the moment Google Earth is only available for Nexus One, iPhone, and Droid - so it's currently not available for HTC Desire".

iTnews tested all three functions for one week on a HTC Desire handset purchased from Telstra without any crashes or other phone instability - but readers who choose to try these modifications should do so at their own risk.