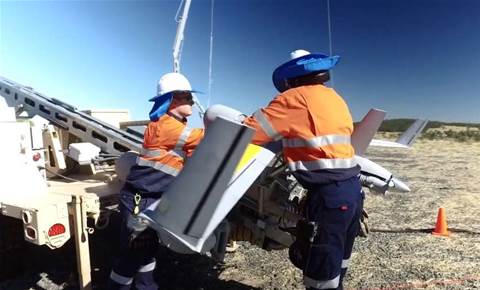 Shell QGC workers getting a drone ready for flight

To monitor infrastructure across multiple industries.

The Queensland government will hand over $1 million to fund the development of drone technologies that could benefit critical industries under a partnership with Boeing, Shell QGC and Telstra.

Premier Annastacia Palaszczuk today said the trio were experimenting with remotely piloted aircraft systems (RPAS) that could be used for monitoring infrastructure in the mining, telecommunications, agriculture, energy, LNG, and search and rescue industries.

Drone technology has become increasingly popular in critical industries in recent years, due to its potential to dramatically reduce the cost and human risk involved in monitoring infrastructure.

The money will fund a situational awareness system prototype that will help the drones operate safely over distances. The partnership will also look at building "enhanced" data analytics tools, the state government said.

The premier claimed 100 new aerospace jobs would be created as a result of the $1 million grant.

The initiative is the first under the state's $10 million platform technology program, which is aimed at building new technologies in the areas of drones, big data, and the internet of things. It comes under the umbrella of the $405 million Advanced Queensland innovation drive, the centrepiece of the state government's economic policy.

“This aims to test and develop platform technologies – groups of technologies which form a base to take the next technological leap – in areas where Queensland has scientific knowledge and emerging industry strength," Innovation Minister Leeanne Enoch said in a statement.

The state government wants to make Queensland the hub of the APAC aerospace industry. It is currently creating a ten-year aerospace roadmap and action plan.