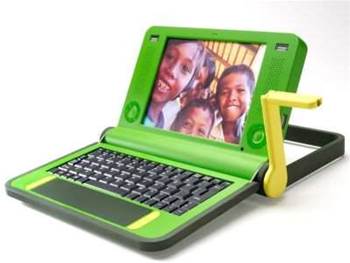 Quanta Computer is planning to produce a retail version of the One Laptop per Child notebook for developed markets that will cost US$200, the company's president told has said.

Quanta is already producing the low-cost educational notebooks for developing nations. The units are scheduled to start shipping later this year at an estimated cost of US$150.

But the design can be adapted to create a low cost consumer PC, according to Quanta president Michael Wang.

"We will definitely launch a commercialised product at the right time similar to the OLPC," Wang told the FT.

The Taiwanese firm manufacturers notebook computers and other electronics for brand name companies such as Apple, Dell, HP and IBM.

One Laptop per Child is an educational project which develops notebook computers aimed at children.

Powered by open source software, the OLPC features design innovations that allow it to operate in regions with limited power supply, infrequent internet connectivity and a dusty environment.

Got a news tip for our journalists? Share it with us anonymously here.
Copyright ©v3.co.uk
Tags:
200consumerhardwareolpcplansquanta