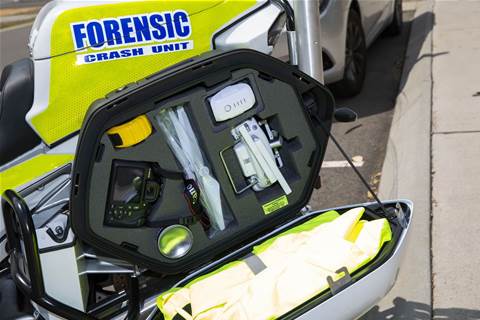 Specialist Queensland Police officers have begun using drones to map major traffic incidents in a bid to drastically cut down the amount of time spent at crash sites.

New motorbikes equipped with drones have been deployed by the state's forensic crash unit to reduce scene mapping and road closure times, while improving the quality and accuracy of evidence.

Congestion caused by traffic incidents on Brisbane’s roads is currently estimated to cost $23 million in lost time and productivity each year, according to Queensland Police.

Initially isolated to the state’s South East, the drones will help to accelerate the process of scheme mapping by investigating officers – one of the contributing factors for protracted road closures.

The technology represents a drastic change for the unit, which has been using the same technology for investigations for the past 23 years.

The project found that drones could be used to reduce scene mapping times by approximately 50 percent.

Police minister Mark Ryan said the “innovative approach” was backed by procedures and policies that have been developed in consultation with stakeholders.

“This has been a thoroughly researched project and included consultation with key stakeholders to develop procedures and policies for the effective and safe deployment of the drone technology on motorways, highways and major arterial roads and its subsequent admissibility in court,” he said.

Four drones, which can be operated by eight trained officers, have so far been deployed in South East Queensland.

QPS says the implementation has been found to cost “less than mapping methods previously used”.

Other state and territory policing agencies are also investing in drone technology, including Victoria Police which will acquire up to 50 drones over the next year to give officers mobile eyes in the sky.