Qld govt staff could work side by side with robots 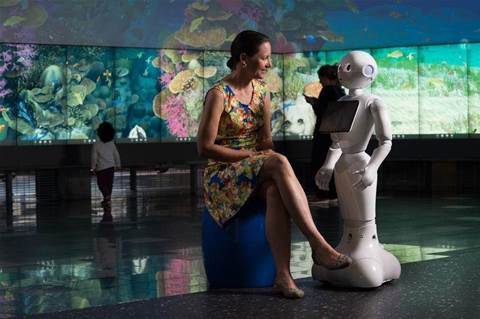 New IT strategy hints at move to "blended" workforce.

The Queensland government has hinted at a future workforce made up at least partially by robots as part of its new digital strategy launched today.

The strategy - dubbed Digital 1st - charts how the state aims to become a leader in digital government to 2021.

It is largely centred on "putting people at the heart" of government services that are personalised and delivered through digital channels.

It consists of four core priorities - people, connectivity, collaboration, and trust - and eight principles intended to act as "guiding values" that inform decision-making.

As part of its drive to 'give the government workforce the tools to their job today and tomorrow', the Queensland government indicates an interest in "blended workforces".

It highlights current trials of humanoid robots within its workforce and indicates further experiments in the future.

The Department of Transport and Main Roads has been trialling SoftBank's Pepper humanoid robots in its service centres for the past few months.

The proof-of-concept aims to "develop a solid foundation on which to make informed choices and play a key role in shaping the direction for adoption and integration of robotic technology into our future workplaces and communities," according to the department.

The state government is also trying to position itself as a regional leader in robotics. It signed the proof-of-concept for Pepper and NAO bots as part of its Advance Queensland set of initiatives late last year.

The trials involve the development of robotic applications for use in government customer service centres as well as in education, for both teaching aid purposes and learning within the curriculum.

"Innovation is accelerating as technologies such as robotics, cloud, big data, the internet of things, artificial intelligence and machine learning are transforming the economy," the strategy states.

"We want to seize the opportunities these technologies bring, to make it easier, faster and cheaper for businesses to engage with government."