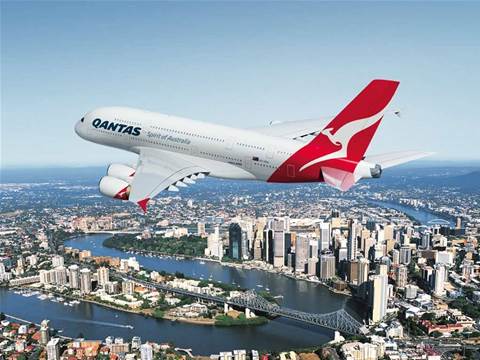 The airline's Finance Data Warehouse project was one of several key IT projects identified by David Hall, corporate services director at the airline, in light of IT spending figures released by the airline during its annual results call.

Late Friday, iTnews spoke to Hall to dive deeper into IT strategy at the airline on his last day before taking the helm as chief executive of Jetstar.

Qantas reported profits of $377 million for the fiscal year to June 30, 2010, and reported communications and IT costs of $405 million, which was flat against the prior year.

Hall has pointed out, however, that the $405 million figure only relates to "external costs" and doesn't include other IT costs, such as wages for IT staff or the IT group's costs in managing other areas of the Qantas operation, such as Jetstar.

The airline specifically spent $82 million less on technology than in the prior fiscal year. But Hall has still managed to fund major technology refresh programs by reducing costs elsewhere in the IT operations.

"We had material savings across the business, which fed investment into new systems," Hall said.

The first line item of savings came from manpower after Qantas outsourced program delivery to IBM in September 2009.

"When Qantas staff moved across to IBM, that manpower cost became an external cost," Hall explained.

"We also made savings at the tail end of the last financial year during a restructure, in which there were some permanent exits," Hall said.

Total spend was also impacted by deferred or cancelled IT projects.

"We saved in the back to fund the front," Hall said. "We basically saved backoffice functions and put that into customer facing systems."

Hall said he spent much of the fiscal year investing in core systems upgrades across the business.

The airline was also upgrading its engineering systems - which schedule the airline's routine aircraft maintenance and spares program - to a new system by Canadian vendor MXi.

It had also upgraded its freight systems, which handle yield management (the scheduling and planning of freight), to the IBS iCargo platform.

Among its most recent investments, Qantas said it had enhanced its Hyperion Financial Planning applications and Teradata Finance Data Warehouse, which included feeds from the Oracle finance system it built some two years ago.

Hall said this would provide "more accurate analytics and reporting" to Qantas management.

Some 300 staff within Qantas management were also first to trial Microsoft's latest mail and collaboration software (Exchange and Sharepoint 2010) after the airline decided to abandon its investment in Lotus Notes.

Hall said the company was preparing to roll out the software to some 20,000 staff and was also in talks with both Microsoft and outsourced desktop provider Fujitsu about the possibility of moving to Microsoft's cloud-based collaboration tools in the future.

"If we can use cloud technology for speed, ease or cost, we will," Hall told iTnews.

The biggest upgrade on the airline's agenda, however, was its next generation check-in system, which Hall said would "materially improve the customer proposition as they move through the airport."

The system, launched in late July in Perth and due for launch later this year in Sydney, offered self check-in capabilities for premium customers, and involved the deployment of new kiosks, chip cards, and an RFID network for permanent bag tags.

These new smarts needed to be integrated with existing check-in systems.