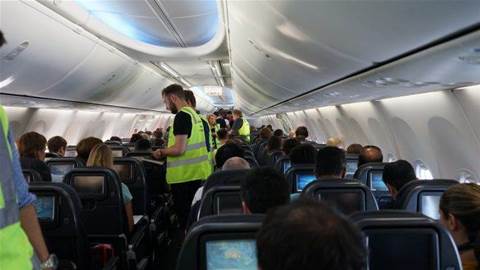 Qantas expects to invite passengers to start trialling its free wi-fi service within weeks after running a load test with 140 users that saw simultaneous download speeds of between 7Mbps and 12Mbps.

The airline said in a blog post that it used a “special charter” flight between Sydney and Brisbane filled with 140 staff to “test the limits of the system”.

Each staff member was given different tasks to perform over the internet connection, and combined they connected 200 devices to the in-flight network.

“For a system that is still being tested and refined, it performed extremely well,” Qantas said.

“Typical download speeds were between 7 and 12 megabits per second to each connected device.

“Most of the testers experienced a seamless streaming experience. But everyone downloading apps at one time did test the limits”, it said, noting this was “something that would happen normally.”

Other tests of the service were performed by the crew, with pilots accessing “real time weather” information for the route on their iPads, which Qantas said offered “more detail than … short-range radars on the aircraft”.

Cabin crew also tested use of a Qantas app designed to help passengers with connecting flights, should delays affect other sectors of their journeys.

Qantas said it is now “working to make final adjustments ahead of inviting customers to test, then use the system.”

“We expect that will happen in the next few weeks,” the airline said.

“We’ll be using these more typical user experiences to keep refining the system for several months as part of our broader trial, before planning to roll out wi-fi out across 80 of our domestic aircraft from mid-2017 onwards.”