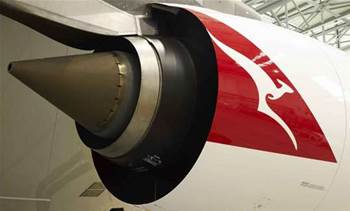 Qantas has flagged tablet devices like the iPad as an alternative to costly in-flight entertainment systems after trialling a wireless content streaming application earlier this year.

In mid-January, the airline deployed wi-fi on one domestic Boeing 767-300 aircraft and supplied passengers with iPad 2 devices that were programmed to boot directly into the Q Streaming app, providing 200 hours of audio and video content.

Qantas also planned to trial passenger access to the entertainment system from their own Apple devices and laptops with Microsoft Silverlight installed.

A spokeswoman said the downloadable application was still in development, despite initial plans to introduce it in late February.

Chief executive officer Alan Joyce told the Australia-Israel Chamber of Commerce (AICC) this week that the iPad was an “amazing opportunity” for Qantas to cut costs and boost productivity.

“It’s a Panasonic system which is state-of-the-art, and it’s great when you’re on board. But in three-to-four years time, that will be out of date, and the cost involved in revamping it is huge.

“In terms of future costs, future development, it’s huge ... [Mobile devices could be] a huge saving and increase in productivity for us.”

For the six months to 31 December, Qantas recorded a half-year profit of $202 million – down $215 million from the previous year.

Joyce said the airline would boost productivity through improvements in infrastructure, people, processes and technology – including aviation technology and IT.

He highlighted an annual spend of $2 billion on new aircraft, with upcoming features like satellite navigation to land planes more accurately and avoid 20-minute holding patterns costing $1600 in fuel.

Customer and staff satisfaction was also on the rise, he noted, crediting its “smarter, faster” next-generation check-in systems that automated data entry at airports.

“In airlines, technology is really key,” he said. “We work very closely with IBM on a range of technologies across the board.

“We’re trying to be leaders in the use of that technology ... IT is a key priority of our productivity strategy.”