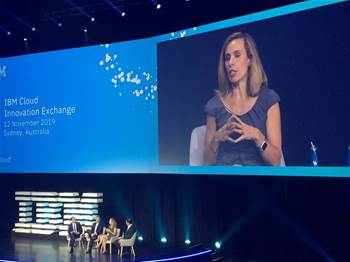 Qantas has revealed it has now shifted the bulk of its applications onto cloud platforms as it doubles down on automating customer service queries and transactions to free up staff to deal with more complex challenges like fuel and incident management.

The milestone was revealed by Qantas group chief information officer Susan Doniz at IBM’s Cloud Innovation Exchange event in Sydney on Tuesday, where the vendor put its major corporate customers on parade to shore up its local base against encroaching competitors.

“Across our cloud journey I'm really incredibly proud of where we are – especially for an airline –where almost 70 percent of our, our applications are on the cloud," Doniz said, adding that “the last 30 percent  are the really, really hard ones.”

Doniz’s positioning of where the airline is at in terms of its infrastructure renewal indicates it is making substantial headway in reducing operational costs by paring back legacy systems that have previously stunted ambitions to make flying for customers an altogether more seamless exercise.

Because Qantas is a full service carrier, where it needs to strongly differentiate perceptions of value from price-driven rivals, the digital frontend of its service is heavily weighted towards personalisation, and value-added services that must come together as one.

In June Qantas used an AWS event to reveal key details around its cloud environment that is internally dubbed QCP – or Qantas Cloud Platform.

Apart from the platform allowing Qantas to use infrastructure-as-code and operations-as-code at scale in the cloud, the airline also made public that QCP is run by a core platform team of just 12 people, an efficiency it’s using to double down on optimising its estate.

That includes plans to shift workloads running on mid-range and mainframes into cloud by 2021, a chunk that would appear to fit the bill for what Doniz described as tougher to move.

“What's been really important is we actually need the cloud, in order to drive a sustainable competitive advantage for Qantas. I really think that technology is the key to unlock that. And the reason for that is it because it creates scale,” Doniz said.

“It allows you to scale up and down to meet demand, but also for big complex problems for [our artificial intelligence] you actually need to really scale up and quickly scale down.”

And as much as Qantas promotes its push the excitement of travelling with it as a lifelong positive memory, the application of AI under the hood is a commercially ruthless affair.

Doniz said AI was now being applied to budget brand Jetstar’s “low cost guarantee” to rapidly pinpoint its relative pricing in the market and keep its edge.

Even small shifts in inventory pricing are important for airlines because it can propel their seats to the top of the heap in searches used by consumers and travel agents, thereby increasing the probability of bookings and thus better yield.

“It used to take a really long time to do because somebody actually had to go back and look at it,” Donz said.

“Now what we do is we use the automation and the data technologies to do that in seconds. You probably don't even notice that that's actually happening in the back room so to speak.”

Scaling up AI is also being applied to disruption management – that is trying to minimise unavoidable disruption – Doniz said.

“Things have a ripple effect, so it's not just that one event you're solving for. You actually end up solving for a whole series of events, and you have airport slots etc.

“Now we have the technology that allows us to do that in minutes, where it used to take hours to do in the past.”