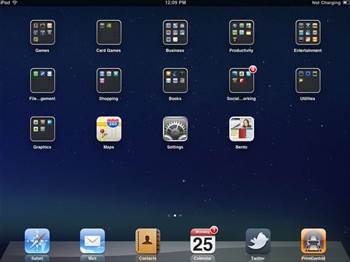 Is the upgrade worth the effort?

Within weeks, Apple will release the next operating system for the iPad, iOS 4.2.

But is it worth the effort and will anything break?

We've had a play with the OS upgrade [see gallery above] and list below five reasons why iPad owners might want to upgrade.

Although this sounds like an enterprise feature, anyone using Gmail can now set up Exchange accounts for Google and the office. And consultants can now set up accounts to stay in touch with everyone easily.

On the iPad, iOS makes visible only one app at a time. But the ability to quickly switch between apps will be benefit those who use it for business.

Like the iPhone, double-pressing the iPad's main button brings up a scrolling list of the most recently active apps. Scrollito the left to find an option to lock the iPad's screen rotation. The button on the right side - above the volume control - is now a mute button.

And Apple has a new display brightness control.

Printing from the iPad no longer requires buying third-party apps such as Print Central because Apple added print support to all their apps.

For example, in Safari, the button next to the address bar now has a print option. Same for the reply/forward button in Mail.

Developers will need to add it to their apps but hopefully they will be swift.

Generally, iOS 4.2 for the iPad shouldn't break your applications.

Apple's track record has been that applications created by developers that stick to Apple's rules - something that's hard to get around given the way Apple curates the App Store - should work just fine when making the switch from iOS 3 to iOS 4.2.

Better yet, developers have had access to iOS 4.2 betas for weeks so apps that need tweaks - either to ensure stability or to add features such as printing - should be released at almost the same time as it is available.

5. Folders to organise your apps

With the iPad hold 24 apps a screen, it doesn't take long for them to become unwieldy. Like the iPhone, being able to create folders to manage common apps (eg games, drawing and social networking) eases finding the program you're after and you won't need to scroll through so many screens.

So should you upgrade your iPad when  iOS 4.2 is released?

We say "yes" - with the only reservation being that you wait a day or two just to be sure that any apps you rely on aren't the subject of compatibility issues.