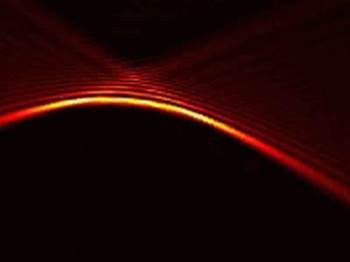 Researchers have generated self-healing, curved beams of light on a flat metal surface in a move that could yield improved optical computing components.

A team of physicists from the Australian National University (ANU) in Canberra generated the so-called Airy beams on a 150-nanometre-thick gold film.

Airy beams are light waves that travel in a curved arc for some distance without deforming due to diffraction. They were theorised by quantum physicists in 1979 and first observed in 2007.

According to ANU professor Yuri Kivshar, the beams could be employed in future plasmonic circuits that used electron density waves to quickly transmit large amounts of information.

In collaboration with the Friedrich-Schiller University in Germany, the ANU team coupled light waves with electron density waves on the metal plate’s surface to form ‘surface plasmon polaritons’ (SPPs) with Airy properties.

The resultant Airy plasmon beam was found to recover its shape after passing through small surface defects, as was expected from a non-diffracting beam.

The demonstration could also open new opportunities for optical sensing, photonic circuitry and magnetoelectronics, they wrote.

The Canberra team was one of two to describe Airy plasmon beam techniques in scientific journals this month.

In a separate study, the US Department of Energy’s Lawrence Berkeley National Laboratory was able to dynamically control the beams’ curved trajectories in real time over a metallic plate.

The ANU research team said experimental demonstrations of plasmonic Airy waves represented “an important milestone in the field of plasmonics” but challenges remained.

“The whole success [relies] on the development of the next generation of plasmonic, rather than photonic, optical chip,” Kivshar said. “It is too preliminary to discuss applications [of Airy beams] to computing.”

Friedrich-Schiller-University Jena
Got a news tip for our journalists? Share it with us anonymously here.