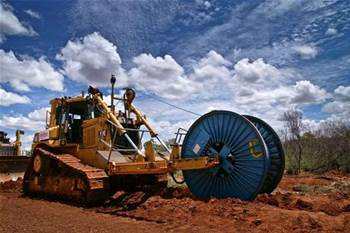 Nextgen Networks will lay nearly 6,000km of new backbone links along five separate routes for the program under a deal announced in December.

Mt Isa is the midway point along the 3,835km route from Darwin to Toowomba, and the longest of the five regional backbone links to be constructed under the program.

Construction of the Darwin, Mt Isa, Emerald and Longreach link is expected to take around 18 months to complete.

"One of the biggest obstacles for fast broadband in Mt Isa has been the lack of competitive fibre optic backbone services," said Senator Stephen Conroy,Minister for Broadband, Communications and the Digital Economy, at the launch [see photos, top right].

"Once complete, this link will allow other broadband providers to enter the market and offer faster broadband speeds, cheaper prices and more choice for people and businesses across the region."