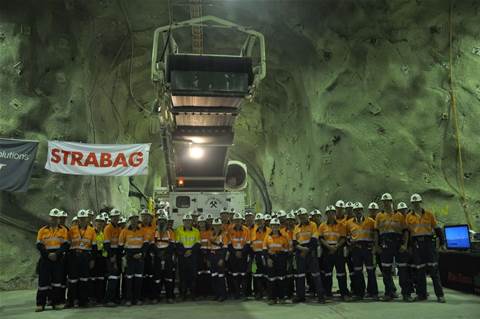 Rio Tinto has initiated trials of a 64-metre long tunnel boring machine at its Northparkes mine as part of the Mine of the Future program.

The German-built machine was designed and developed by Rio Tinto and Aker Wirth over four years.

Northparkes is a copper and gold mine located in Central Western NSW.

The machine is controlled by an on-board team of 12 personnel and is supported by "three underground haul trucks" and "an above-ground crew of around 15 additional people".

"The machine is operated from a central control cabin located on the machine itself," Aker Wirth said in a statement.

"The high degree of automation minimises contact between personnel and both moving components and rock".

The technology trial is expected to run until around July this year, after which a "comprehensive critique of the performance" is to be conducted, according to Northparkes Mines tunnel boring manager Rob Cunningham.

The machine could be put to use in other Rio Tinto mine sites worldwide in future.

For now, it is being put to work at Northparkes cutting through rock about 600 metres below the surface. It is expected to tunnel as much as 10-to-12 metres a day, and about 1400 metres over the life of the trial.

It was officially put into action on Friday last week in an underground ceremony attended by top Rio Tinto innovation and technology executives, though the machine was actually delivered in October 2012 and took four months to assemble.

"This investment offers the possibility for a significant improvement over conventional drill and blast practices," Rio Tinto's head of innovation, John McGagh said.

"Depending on rock and operating conditions, this system should provide the capability to excavate more than double the rate of conventional methods".

Rio Tinto's Mine of the Future project also covers autonomous drills, trains and trucks, and is being progressively rolled out at iron ore mine sites - most of which are in Western Australia's Pilbara region.