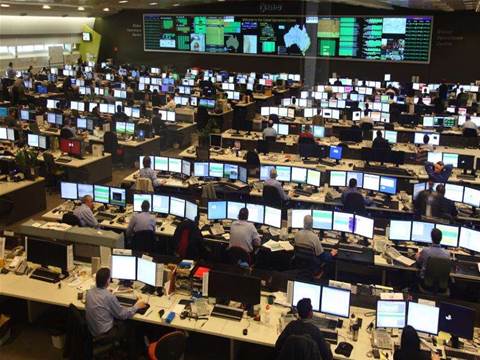 Ten years on, the world finally gets a look inside.

To celebrate the occasion, Telstra invited ITnews on a rare tour of the facility.

According to Michael Rocca, group managing director, Telstra networks and services, it was a worlds first.

"Back [in 1992] we had over 122 sites performing the function that this site performs today. It was a bold move ... to rationalise and consolidate all those together in one. It was a world's first, nobody had attempted it before, and even today, Telstra is one of the few telcos in the world that has a facility like this," said Rocca.

"We have, of course, continued to invest in growing the centre. Ten years in this industry is a long time as technology continues to change rapidly. We have upgraded and continued to invest, in terms of IT systems support and the tools the staff need to successfully operate this centre," said Rocca.

Craig Hancock, executive director of network services at Telstra, said the way the company monitors its network has changed completely over the past ten years, from being technology centric to customer and product centric.

"We used to just look after technology ... so if anything went wrong [with the PSTN, IP or the core network] we would hit the alarms because knew we had an issue with a particular network element, and we would go and fix that. Now, we have a central IP core, everything traverses the network and things like mobiles are an access mechanism to get access to the core network as opposed to an individual element," said Hancock.

During its operation, the centre has been Telstra's base for several major events such as Y2K, the Sydney Olympics in 2000, the Rugby World Cup in 2003 -- where 202,000 mobile calls made and received while 226,000 text messages sent from the stadium. On Christmas day 2008, Telstra customers sent over a million MMS messages (new record for a 24 hour period) and made 12 million calls from their mobiles, which was double the number compared to the previous year. The operations centre allows Telstra to reconfigure its network and provide excess capacity where required from a single building.