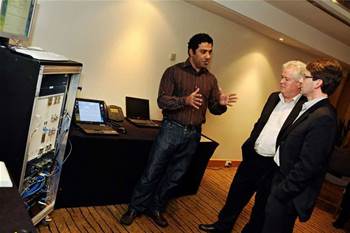 Networking vendor Ericsson has lugged an 'NBN-in-a-box' [see photo gallery right] through three Australian cities in an attempt to woo key stakeholders of the value of its products and recommended architecture.

The 'mini-NBN' was demonstrated to industry stakeholders in Sydney and Melbourne and before representatives of Federal Government departments in Canberra.

Tony Malligeorgos, vice president of marketing at Ericsson said the road show was put together to inform stakeholders of the "consequences of technology choices" when rolling out fibre networks.

Ericsson engineers told iTnews the latest GPON switches could feed out 2.5 Gbps of connectivity, but once shared to 16 and 32 splitters, the end user experiences speeds were closer to 100mbps.

These switches can be connected to street-level cabinets via fibre links that reach up to 20 or 50 kilometres.

Malligeorgos said he expects two to three generations of switches to be released between now and when the National Broadband Network is fully rolled out.

"In Singapore, they may have started with 100 Mbps, but they fully expect to go to 1 Gbps."

"We might move from Gigabit PON to 10-Gigabit PON during the course of the eight year roll-out for the NBN," he said. "Speeds of 400 Mbps or 500 Mbps or 1 Gbps are very realistic in that time frame."

The American model was the "biggest and ugliest", and fitted with a battery backup unit and only one Ethernet port to connect to the resident's home gateway in order to assure monopoly access for the service provider that laid out the fibre.

"This is most certainly not an open network," said Goodwin.

Goodwin said the battery backup unit would require an electrician to fit a new power point on the outside of the house - at cost to the user. Mandating any solution with a battery, he said, would only result in battery units ending up in landfill.

"Let battery backup only be there as an option for that tiny fraction of users that need it," he said.

Ericsson recommended indoor units, with multiple Ethernet ports and POTS to connect analogue telephones alongside VoIP units if so desired.

The company stressed that "only a tiny fraction of the NBN spend will go to providers of active networking equipment" such as Ericsson. Most of the spend will be on "holes, poles and permits."

Malligeorgos said often, existing ducts for underground cables were unavailable for use "either because there isn't space, or Telstra has plans for the space." Aerial cables, on the other hand, are "faster and cheaper" to install but more vulnerable to storm damage, fire, birds and insects.

Ericsson expects the method by which consumers, carriers and ISPs connect to shift under the NBN - namely that application providers (such as smart grid providers, health network providers, or home security providers) will seek direct access to the NBN, rather than through ISPs.

iTnews asked Goodwin about the estimated cost of rolling out GPON to 90 percent of the population.

"But you should understand that in this context, Verizon saw it as the way they must act to take on competition from cable companies," he said. "While it is expensive, it is far cheaper to operate than a fibre network - Verizon are reporting 20 percent less service calls from customers."

Goodwin expected the fibre rollout, an investment that will last at least 30 to 50 years, to yield a positive outcome.

"Yes, you need take-up early," he said. "But the reality is the copper network will have an end date.

"At some point in the future, we may have to mandate an end date to the copper network, after a certain percentage of the population moves over to fibre. There is a point at which the copper network will be uneconomic to run.

"It's a policy decision. We need a managed approach, with a timeline."

ISPs running ADSL2+ may be able to provide services in parallel for one to two years before the network is switched off, he said.