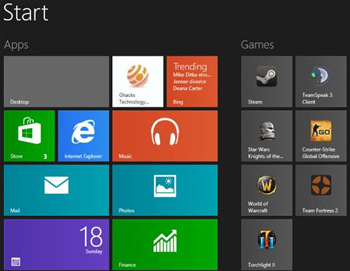 Fujitsu the latest to warn the market.

Microsoft’s partners have reported that personal computers running the new Windows 8 operating system have generated lower than expected sales in the consumer sector.

The company expected to ship seven million PCs in the year to March 31, 2013, but has revised its estimate to six million.

Executives at Acer told The New York Times much the same story in the lead-up to Christmas.

Microsoft’s new operating system, which features a new ‘tile’-based interface that ties in neatly with the vendor's investments in the mobile arena, was launched in late October 2012 with notably less fanfare than past Microsoft releases.

Microsoft executives claim the company sold more Windows 8 licenses than Windows 7 in its first month, but analysts note that most of these licenses were sold to hardware partners, which have since found them hard to resell.

Despite some positive reviews, "clearly Windows 8 did not prove to be the impetus for a sales turnaround some had hoped for,” said NPD analyst Stephen Baker, when the firm released a monthly report on Windows sales at the end of November.

Baker’s poll of US retailers found that sales of devices running Windows had actually fallen 21 percent on the year prior in the month immediately following the launch.

Baker noted that Windows tablet sales represented only one percent of the total mix - mostly due to availability issues - but he lauded the development of a ‘premium’ market for touch-based notebooks running Windows 8 (representing six percent of sales) as an encouraging sign.

Asus, manufacturer of what is believed to be the most popular Windows 8 touchscreen laptop, has been reticent to reveal sales figures.