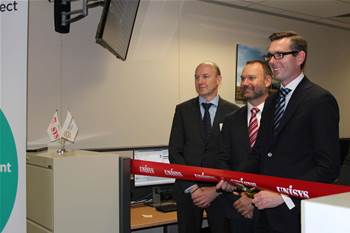 NSW finance minister Dominic Perrottet hopes the outsourcing of corporate support services to the private sector will become a blueprint for the rest of government.

In the middle of last year, the NSW government signed Infosys and Unisys to take over the work previously delivered to seven major departments by government-operated corporate services office ServiceFirst.

The minister today marked the final stage of that transition by cutting the ribbon on the Unisys call centre that will deliver IT support services to the former ServiceFirst clients under the deal. The new site has been taking calls since mid-December last year.

Unisys said the contract has created 128 new positions within the company, with 90 percent of the staff working on the NSW government account based in NSW.

“I really see this as the start of something,” Perrottet said at the Rhodes launch.

“When governments get in this space there are obviously concerns sometimes in the public service.

“But having something that is set up, that works, that people know about in the public service, that is getting a better product with the savings attached to it ... I think it’s something that is going to be successful and something that, down the track, I would expect other agencies to follow.”

However, he confirmed his department is yet to receive formal expressions of interest for the model from NSW agencies, a move he said at this early stage would be “premature”.

The NSW outsourcing move has already started to attract attention from other jurisdictions: late last year the federal Department of Finance told industry members it was watching the transition closely in the context of its own shared services operation.