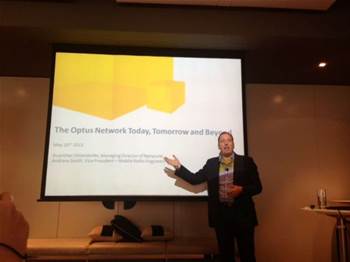 The TD-LTE network will run on 2300 MHz spectrum.

Data upload and download on TD-LTE occurs on one pipe on the same frequency, but at different times, while FD-LTE uses two separate frequency channels, one for upload and one for download.

Optus first introduced 4G services in September 2011, and expanded the 1800 MHz-based network out to five state capitals throughout 2012. It will continue to expand its 4G network to 70 percent of the metropolitan population by mid next year.

Optus Networks managing director Gunther Ottendorfer declined to comment on which suppliers the telco had brought on to build the network.

Optus was expected to launch the TD-LTE network last month.

It is trialling the network with two new TD-LTE compatible products, a 4G dual band dongle and wi-fi modem, with both available for sale early next month.

The two devices will be the only products in Australia currently compatible with the 2300 MHz spectrum. Devices running on current 4G networks, such as the iPhone 5, are incompatible.

Optus has 12 TD-LTE base stations in Canberra and will add a further 20 in the next few months.

The deployment of the TD-LTE network is made possible following Optus’ closure of its Unwired network, which opened up 98 MHz of spectrum in the 2300 MHz band.

Future 4G investments will occur in digital dividend spectrum that was recently auctioned by the Federal Government.

Ottendorfer signalled it was unlikely Optus would pick up any of the 30 MHz spectrum passed in at the auction.