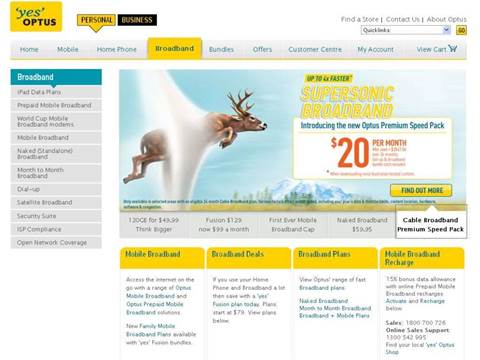 The competition watchdog has filed a case against ISP Optus over claims of "supersonic" broadband in advertisements for its newly-upgraded hybrid fibre coaxial (HFC) cable service.

It was the second case in four months to be filed against Optus over claims in its broadband advertising.

An Optus spokesman "acknowledged the claims made by the ACCC" and said the carrier looked forward to "working with the ACCC to resolve any concerns they may have.

"Optus goes to great lengths to offer the best products and services to our customers and to explain the value of those offers clearly," the spokesman told iTnews.

The Australian Competition and Consumer Commission said that the Federal Court had fast-tracked a hearing date for next week.

"Under these [supersonic] plans, a customer pays a specified monthly sum and receives a specified data allowance for that month divided into peak and off-peak periods," the ACCC said of its complaint.

"However, once the customer exceeds the peak data allowance, the internet connection is limited to a speed of 64 Kbps.

"The ACCC alleges that Optus did not sufficiently or clearly disclose, and in some cases did not disclose at all, these qualifications."

The commission said it would seek injunctions, "civil penalties, corrective advertising and costs" from Optus.

Optus last month changed advertisements for its "unlimited" internet and phone bundles in response to a separate case filed against it in June.

The telco had previously marketed an "unlimited home phone and broadband bundle" that included 50 GB of "superfast" broadband that was then throttled to a speed of 256 Kbps.

It was seeking a Federal Court declaration in that case on the meaning of the term "unlimited" with respect to broadband plans for future advertisements.