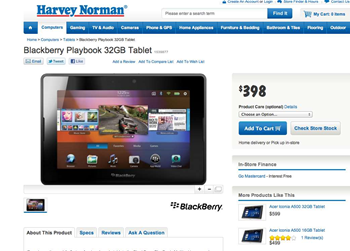 Optus will give Research in Motion's (RIM) 16GB PlayBook tablet to anyone who buys a BlackBerry Torch 9860 smartphone on its two year $49-a-month plan.

Its move to bundle the tablet with a BlackBerry device follows Vodafone Australia's plans launched in June.

Last week RIM revealed it would take a huge charge related to writing down the value of its PlayBook inventory and that it was planning aggressive promotions for the device across the globe.

RIM Australia is still selling the PlayBook through its own website at the mid-year launch price, however Australian retail giant Harvey Norman appears to have cut the price of its PlayBook supplies in November.

The 16GB PlayBook is available for $348 at the retailer, about $230 off RIM's recommended $579, and well below comparable rivals.

PlayBook prices at various British carriers and retailers fell in late October for a limited time to £150 ($228) below the original price of £399 for the 16GB device.

Analysts in the US believe RIM's discounts there would leave it with a $50 to $75 loss per PlayBook sold, and that its inventory woes, though worsened by the PlayBook, could also be stemming from a slow down in sales of the BlackBerry phone, Barrons reports.

RIM will report its third quarter earnings on December 15.