Opinion: NBN and the art of planning

Expect NBN Co's plan to be wrong... for the right reasons.

The NBN Business plan, like Australia’s response to floods in Queensland, provides insights into the art of planning writes David Havyatt.

We Australians are a pretty cynical lot.  Despite having above average health and education outcomes in the OECD for below average expenditure, we tend to bemoan the state of our hospitals and schools.

We tend to raise concerns about inflationary pressure, for example, in response to Government spending programs proven to have boosted consumer confidence during the global financial crisis.

Whatever your take on these matters - the difference between a government bumbling through such challenges and achieving successful outcomes is usually down to good planning.

Just before Christmas Australians were afforded the opportunity to read NBN Co’s 2011-2013 Corporate Plan.  The release of this plan had been delayed due to the need to amend it to reflect the determination of the ACCC of the number of Points of Interconnection required for a competitive market.

In my opinion it is a very robust plan, very soundly based on a methodology that any corporation would recognise.

If you’ll allow me to digress, a slightly different kind of planning has been in evidence in response to the floods in Queensland.  Overseas news reports like the New York Times have really put these floods into context by describing the area flooded as about the size of France and Germany.

Anna Bligh was very composed discussing the State Government response to this disaster. In particular she mentioned how changes had been made to command structures following Cyclone Larry.  She also mentioned the success of the SMS alert system, a national initiative following last year’s bushfires.

Similarly Australia’s Prime Minister noted at a press conference that offers of assistance have come from New Zealand and the USA, but that we don’t actually need any help right now.

That’s because flooding is something we expect, and no amount of attempts at damming could ever stop it. Australian Governments at all levels plan for events like these.  And if the response in Queensland is any guide, ultimately they do it well.

Premier Bligh noted that sometimes a post-event review suggests ways to do things better, so you adapt and prepare again.

That brings us back to the NBN Co Corporate Plan.  The plan covers just three years of a 9.5 year deployment and thirty year investment.  From there on the plan does all the things you would expect; it identifies the objectives and the existing environmental constraints, it describes the current and future market and outlines the steps to be taken to start achieving the objectives.

The plan recognises that the future cannot be perfectly predicted and hence deals with certain risks and uncertainties.  Some of the planning assumptions that constitute risks are significant for overall financial viability, but the majority of these (like policy settings on cherry-picking and planning) are within the control of NBN Co’s shareholders.

The area of risk that is outside NBN Co and government control is market size.  Here NBN Co has actually been quite conservative.  NBN Co chief executive Mike Quigley used this term to describe described the assumption that only 70 percent of homes passed will take up the fixed service.

The plan included a graphic of download speeds since 1985.  This really makes the case that the NBN isn’t needed now … but it is needed at the point of its completion in ten years time. 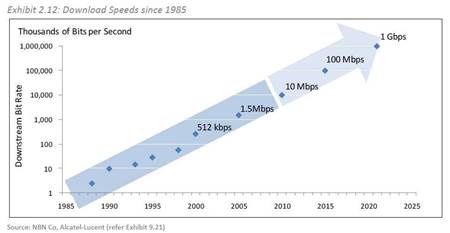 I find it interesting that those who claim we don’t need to start building the network now also question the ability to achieve the forecast number of connections.  The peak of over one million connections in a year equates to 20,000 a week or 4,000 every working day.  But if we don’t start now the connection task becomes greater. 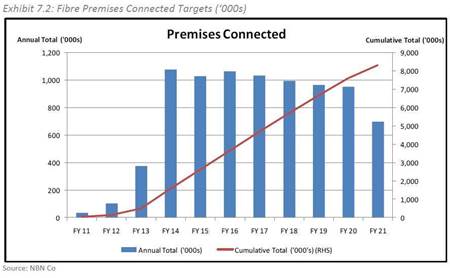 The plan is also robust in undertaking a review of available technologies, not just making the presumption  that the FTTH goal of Government should be beyond analysis.

The plan has had to accommodate the Government’s objective of uniform national wholesale prices.  The real goal is nationally uniform retail prices - which others have argued could be achieved simply through market competition.

For example, prior to competition in long distance calling, charging was based on a series of distance based charge bands.  Critics of competition complained it would result in cheaper calls on thick routes and dearer calls on thin ones.

The outcome was completely different - it has been the elimination of price discrimination on any long distance call.  So a call from Mt Isa to Kalgoorlie costs as much as a call from Sydney to Melbourne despite being made up of PSTN originating and terminating access charges up to four times higher at each end, and having three long transmission legs (Mt Isa to Brisbane, Brisbane to Perth, Perth to Kalgoorlie), compared with one.  Two of these are over long, thinly-used routes.

Analysis of cases like this and the existing fixed broadband market can show policy makers how to use markets to get outcomes.  Thankfully the ACCC saw fit to insist on more points of interconnect.

The most interesting part of commentary on the business plan has been about the rate of return, 7.04 percent.   It is interesting because it is in part misguided.  The low rate of return isn’t so much an outcome of the plan, as an input to it.  Item four of the list of objectives “enhanced by correspondence from the Government” is that the expected rate of return should, at a minimum, be in excess of the current public debt rates.

NBN Co has planned to the constraint.  To be getting a higher return than requested by the funder of the plan would be to do the one thing that a return to a monopoly provider would risk, that is excessive returns.  Over the long run as citizens we don’t want NBN Co to return to the Government anything more than it has cost to build the network. That wasn’t the point of the exercise.

The NBN Co plan is robust and provides a convincing guide to how the NBN will be delivered.  The one thing we can be sure of is that the plan will be wrong – there will have to be some things that won’t turn out the way it has been represented.  It isn’t out of the question that demand and need for NBN services far exceeds the plan’s expectations and there is a need to accelerate deployment.

The challenge here will be to show the same kind of skill as has been displayed in Australia’s disaster planning and to adjust the plan in the face of real outcomes.