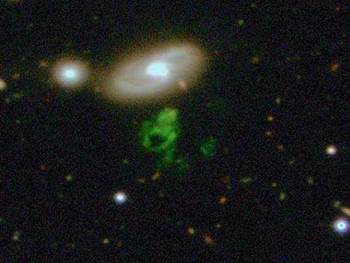 A Dutch volunteer in an online research project has discovered what is believed to be a new class of astronomical object.

The object was discovered in archived images on the Web site of the Galaxy Zoo project, which aims to enlist public support in cataloguing galaxies.

School teacher Hanny von Arkel came across the image of a mysterious, gaseous object with a hole measuring over 16,000 light years across in its centre.

The object has been dubbed ‘Hanny’s Voorwerp’.

When she posted about the image on the Galaxy Zoo forum, astronomers who run the site began to investigate and soon realized van Arkel might have found a new class of astronomical object.

“At first, we had no idea what it was. It could have been in our solar system, or at the edge of the universe,” said Yale astrophysicist Kevin Schawinski, who is a member and co-founder of the Galaxy Zoo team.

Describing the object as a ‘mystery’, Schawinski explained that the Voorwerp did not contain any stars and was made entirely of hot gas at temperatures of about 10,000 Celsius.

Astronomers believe the hot gas had to be illuminated by something powerful, and will soon use the Hubble Space Telescope to get a closer look.

Since there was no obvious source at hand in the Voorwerp itself, the team looked to find the source of illumination around the Voorwerp, and soon turned to the nearby galaxy IC 2497.

“We think that in the recent past the galaxy IC 2497 hosted an enormously bright quasar,” Schawinski explained.

“Because of the vast scale of the galaxy and the Voorwerp, light from that past still lights up the nearby Voorwerp even though the quasar shut down sometime in the past 100,000 years, and the galaxy's black hole itself has gone quiet.”

Astronomers say that ‘Hanny's Voorwerp' could be the nearest example of a luminous quasar, since the nearest active quasar, called 3C 273, is 1.7 billion light years further away.

“This discovery really shows how citizen science has come of age in the Internet world,” commented Bill Keel of the University of Alabama, a Galaxy Zoo team member.

“Hanny's attentiveness alerted us not only to a peculiar object, but to a window into the cosmic past which might have eluded us for a long time otherwise.”

“Trying to understand the processes operating here has proven to be a fascinating challenge, involving a whole range of astrophysical techniques and instruments around the world and beyond. This has also been some of the most rewarding astronomy I've done in years,” he said.

The Galaxy Zoo project was imagined and begun by Schawinski and his colleague Chris Lintott at Oxford.

During the past year, more than 150,000 armchair astronomers from all over the world volunteered their time and submitted over 50 million classifications for a set of one million images online.
Got a news tip for our journalists? Share it with us anonymously here.