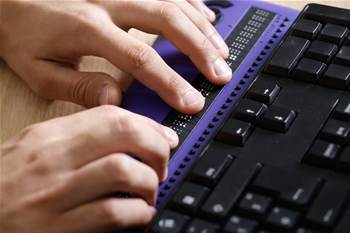 Advocates for blind and vision impaired Australians have lodged a human rights complaint against the NSW Electoral Commission for ditching iVote without a replacement system for secure online voting.

In January, the NSWEC shelved iVote to conduct an “extensive reconfiguration” of the platform after a technical glitch prevented an unknown amount of people from voting in the December local elections.

Vision Australia expressed “serious concern” over the move, with blind and vision impaired voters relying on iVote – considered the “gold standard” from an accessibility perspective – to cast a ballot independently, secretly and verifiably.

Two months later, the NSWEC went one step further, ruling out any use of iVote - the current version of which is due to be phased out - for the state general election in March 2023, as well as any by-elections before then.

At the time, the commission said it would work with representatives of iVote’s core users, including blind or vision impaired voters, to “explore other ways to support their participation in the election”, namely using telephone voting.

Now, peak body Blind Citizens Australia has alleged the “decision to stop using iVote amounts to unlawful disability discrimination”, with no replacement platform to be available in time for the 2023 state election.

The complaint to the Australian Human Rights Commission said cancelling iVote “infringes on the rights of people who are blind or vision impaired to participate in elections by casting a secret, independent, and verifiable vote”.

iVote was originally introduced solely for blind and vision impaired voters in 2011 before a series of legislative changes expanded use of the system to others, most recently in the wake of the pandemic.

More than 94 percent of the over 1100 blind or vision impaired voters that voted in the 2019 NSW election used iVote to cast their ballot. A total of 234,404 vote were cast by electors using the system in 2019.

Blind Citizens Australia CEO Sally Aurisch said that without a platform like iVote for casting votes secretly and independently, blind and vision impaired voters were being denied their “right to a secret vote”.

She said the peak body had “heard from members who were uncomfortable using telephone voting” during the recent federal election.

“Not only do they have to declare their voting intentions to a stranger, but there is no way of confirming that their votes are being accurately represented,” Aurisch said.

“People who are blind or vision impaired have a right to participate equally and freely in elections.

“The decision to scrap the only voting platform which truly allowed us to participate equally clearly disregards this right.”

Recognising the historical integrity concerns with iVote, Blind Citizens Australia is calling for “the reinstatement of a fit-for-purpose online voting platform” for blind and vision impaired voters in time for the 2023 NSW election.

It has previously urged the NSWEC and the NSW government to create a “secret, independent, verifiable voting platform that allows for a multifaceted approach to voting and balances access and security equally”.

Any future development of a new online voting platform should also be conducted in “consultation with our community... to ensure it is fit-for-purpose”, the peak body said in an open letter earlier this year.

Re-runs of the December 2021 local government elections were held in the Kempsey, Singleton and the Shellharbour Ward A areas over the weekend after the earlier results were found to be void due to the iVote technical issues.