NSW spends big on IT in pre-election budget 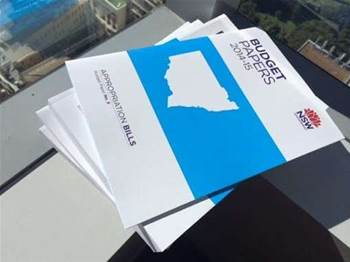 Budget at a glance.

The NSW Government has committed to a goldmine's worth of technology projects in its last budget before the 2015 election, pledging millions in new funding to court technology, health infrastructure and modern customer service systems.

In comparison to an austere Commonwealth IT commitment, the NSW IT industry will no doubt welcome the state's clear emphasis on technology enabled sevices.

The new Department of Police and Justice has recieved close to $135 million in capital funding for a suite of technology projects, including the already announced body-worn camera rollout and funding to buy additional automatic number plate recognition (ANPR) units for police cars.

The money will continue to flow through to the back-office, including:

A further $40 million will expand video conferencing facilities into more courts across the state.

"But there are still parts of the state where, for example, juveniles and accompanying staff have to catch a plane for court appearances because there is no audio visual option."

NSW Health has successfully obtained a long-awaited commitment to the third phase of its IT infrastructure overhaul, worth $51.1 million over the forward estimates.

Technology upgrades to support the state's ambitious service delivery overhaul, Service NSW, will kick off in earnest in 2014 thanks to $98 million that will see back-office transactional capabilities - formerly housed by agencies such as NSW Roads and Maritime and the Registry of Births, Deaths and Marriages - integrated to provide a single channel for government interaction.

Premier Mike Baird expects the volume of online transactions with the NSW Government to increase by 75 percent in the next decade, and is preparing with new initiatives such as a live chat functionlity to be added to the Service NSW portal.

The 2014 budget comes just months after the climax of a state government probity saga which claimed the scalp of NSW Premier Barry O'Farrell and a number of his ministers, and which has spurred new Premier Mike Baird to pledge his commitment to tighten up lobbyist activity.

Budget papers reveal that the NSW Electoral Commission will build a $400,000 lobbyist database over the next 12 months, while continuing to work on its election funding and disclosure amendments projects, due for completion next year.

At a whole-of-government level, the Office of Finance and Services will spend $4.8 million over the next year to progress the transition to cloud within its shared services environment.

The funding is included in a total $59 million suite of new IT projects including online duties payment capability and a spatial data infrastructure program.