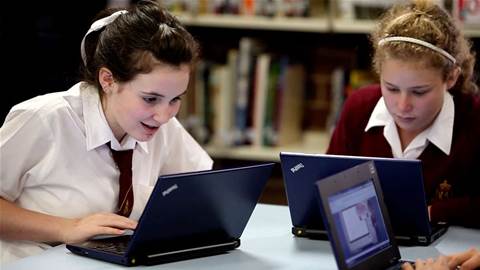 The NSW Government proposes to cultivate a "statewide collection of eBook resources" accessible to all 2243 public schools via state-owned and BYO devices.

The Government proposes that the "DEC Common Collection ... of eBook resources" will be selected and managed by the state education department's School Library and Information Literacy team, which is based in the Sydney suburb of Ryde.

Under the plan, schools will have access to available eBook and "local" book collections. Lending rights for the eBooks would be managed by a piece of software called the school library system.

The move to set up a statewide e-resource collection validates the findings of a 2012 proof-of-concept (pdf) involving five state schools and centres, including facilities at Ryde.

The proof-of-concept made available 5000 "e-resources" from US-based digital distributor, OverDrive. Access to the eBooks and audiovisual materials was authenticated through web-based school library software provided by Softlink.

As of late last week, the state took a major step to put in place infrastructure that will make a centrally cultivated e-resource collection possible.

Standardisation primarily means replacing the DOS-based OASIS school library system, in use at 2215 schools. This system was first deployed in "late 1988".

"This should include access to a diverse list of eBooks titles, integrated with the resource management system.

"The range of titles and formats would allow choice at local school level. Additional options, able to be integrated, could be available for more specialised resources needs."

The report also suggested a "common or shared eBook collection" for schools that could also be used to share "Department-produced materials".

One public school in the trial made its own eBooks and uploaded them into the library system to share across the school.

Once a new hosted school library system is chosen, it will be rolled out after June this year, beginning with 230 schools participating in the Commonwealth's 'Empowering Local Schools' initiative, the tender notes.

The remaining 2013 schools and other facilities are to receive the software between February 2014 and September 2015.

The 28-month implementation timeframe is due in part to the requirement that work be performed in school hours, and not over weekends, during school holidays or several weeks either side of the school year.

No timeline is provided for the establishment of the e-resource collection.

A secondary school in the trial had Amazon Kindle devices "available [but] compatibility issues prevented them from being used in the eBook test", the report notes.

In addition to school-owned devices, staff and students also showed enthusiasm for accessing e-resource stores on their own mobile devices, such as iPhones and Android devices.

"This supports BYOD [device] and BYOT [tablet] approaches, as relevant to any future planning," the report indicates.

"Any package of ebooks considered should be accessible and browsable on a range of devices and readers."

The NSW Department of Education is currently "preparing a BYOD policy template", a first draft of which is being considered by the state's respective primary and secondary principal's associations, according to a presentation made this month. (pdf)

The slide deck indicates that the final decision on BYOD would rest with individual schools.

Schools would need to formulate BYOD policies to address issues such as privacy, lost, stolen or damaged devices.

It is not only the state's public schools that are looking at eBooks. The prestigious Presbyterian Ladies College (PLC) Sydney revealed plans to trial digital textbooks in first term 2013.

The school indicated the trial could aid "social aspects of learning" while reducing the weight of school bags by doing away with paper texts.