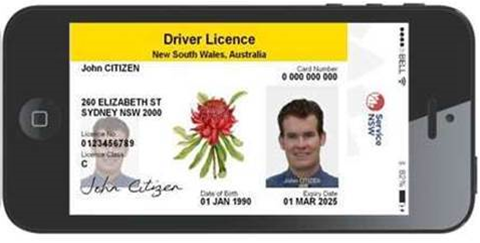 The NSW government is preparing to trial Australia’s first fully electronic vehicle licence with citizens before the end of 2017, after testing the technology with NSW Police.

The first test of the technology was conducted last month with the state's Finance department and NSW Police, using fake data and test systems, a spokesperson told iTnews.

“The purpose of the trial was to help inform the final design of the digital drivers licence,” they said.

The spokesperson said the government was aiming to pilot the prototype licences with a small group of citizens later this year, pending the passage of the Electronic Transactions Legislation Amendment (Government Transactions) Bill 2017. The location of the trial is yet to be decided.

The NSW government is still planning to introduce the digital drivers licence by 2019.

It revealed in its 2017-18 state budget today that $8.5 million would be spent across the next year to develop and deploy the digital drivers licences.

Recreational fishing licences, responsible service of alcohol (RSA) competency cards, and responsible conduct of gambling competency cards were the first to go live on the government’s digital licence platform last November. So far 35,000 citizens have signed up for these licences through the Service NSW app.

Boat driving licences and vessel registration have also since become available, and proof-of-age cards are slated to be migrated to the platform during this year.

South Australia has also begun introducing digital passes and licences after conducting a pilot program in 2016.

Proof of age passes, boat licences, and land agency and land sales representative registration were the first to become available through the state’s mySA GOV app last month. A digital drivers licence will be added to the system in the second half of 2017 following the recent completion of a pilot program.