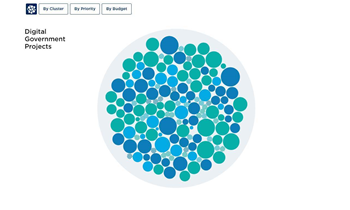 All IT projects across the NSW government's 160 agencies will for the first time be publicly visible in a single location.

The interactive "petri dish" tool groups projects by cluster, budget, and the government’s three digital government priorities of customer experience, data, and digital culture, as outlined in the most recent digital strategy.

It requires clusters to report on the progress of their projects every six months. Given the beta website has just launched the first lot of six-monthly updates are yet to be reported.

Dominello said the reporting tool aims to "enforce transparency” and avoid situations where agencies are “blind to potential cross-agency synergies”.

“Up until now there was no whole-of-government view of digital projects,” he told the state government's inaugural digital thought leadership event in Sydney today.

“We were hamstrung by a lack of reporting, which meant that agencies had no visibility across the clusters that they had.

"Too often we set and forget strategies without seeing how they’re implemented, so this is a real treat because we’re putting some meat to the policies.”

It is unclear how much project tracking detail will be published on the NSW site. Other IT dashboards - like those in play in Victoria and Queensland - detail a project's progress through a green, amber or red traffic light marker.

Dominello also touched on the government’s new “TripAdvisor for data”, known as the dMarketplace.

The data platform, which he describes as the “first of its kind in the world”, will allow both public servants and the wider public to securely access and use data held by state government agencies.

“The dMarketplace is a data sharing platform that makes it easier for agencies to share data by using a whole-of-government API management layer,” he said.

It will become available to government agencies from next week, but the public will have to wait until the first quarter of next year to gain access.

Dominello said the platform would help solve one of the central problems of open data: ease of use. It will offer visualisation tools such as data overlayed on a map to make it simple for users to transform data into actionable insights.

“One of the problems we’ve had with open data is that it is too difficult for people to use because it was just thousands of unorganised datasets," Dominello said.

“dMarketplace solves this problem by organising datasets around life events such as moving to a new suburb or setting up a new business."