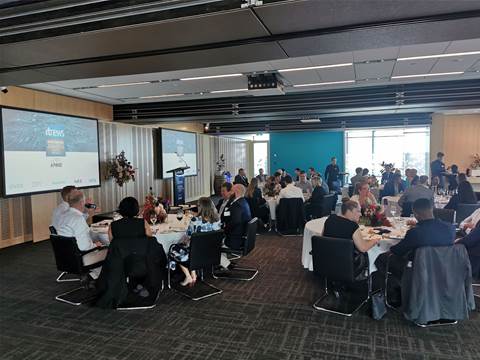 Including Project of the Year winner, the Commonwealth Bank of Australia.

Some of the standout Australian IT projects during the last year-and-half were recognised at an iTnews Benchmark Awards lunch in Sydney yesterday.

The event followed the announcement of the 2021 iTnews Benchmark Awards winners in an online presentation published last week.

While the pandemic prevented iTnews from holding our annual awards dinner this year, some NSW-based finalists and winners came together yesterday to celebrate their achievements.

Service NSW representatives accepted the State Government trophy for COVID Safe Check-in, the first state government-developed digital check-in capability. ACT Health was a dual winner of this award for its check-in app, which it calls Check In CBR.

CBA representatives accepted the Finance and Project of the Year trophies for the bank’s IT Risk Stability Score. The project is intended to improve how the bank manages the health of its IT services.

The IT Risk Stability Score uses a CBA-developed machine learning model to predict the likelihood of high priority incidents across the bank’s technology estate. The model ingests thousands of service management data points and draws statistical relationships to incidents over the previous three years.

This has enabled CBA system owners to “deep dive into IT health control data and system processes to identify opportunities for remediation”, according to the bank’s award submission.

That submission, from late 2020, reported a reduction in the time taken to resolve IT incidents compared with the same time the previous year.

It also stated that the project enabled a “more objective, intelligent methodology and culture in addressing system issues rather than a subjective, opinion-based view of IT health.”

“I personally find it inspiring when I consider the number of people that have helped drive this innovation initiative to fruition inside the organisation.

“While this project has been about the technology, it has also been about the people that have helped us solve puzzles along the way to bring this innovation to reality. We are grateful for that help and are excited to share this victory with them, too.

“This project is yet another example of the power of artificial intelligence and its ability to help the Commonwealth Bank build tomorrow’s bank today for its customers,” Connor said.

Here is the full list of all the award winning and highly commended projects:

The launch of the Australian Consumer Data Right by Regional Australia Bank was Highly Commended.

Project of the Year