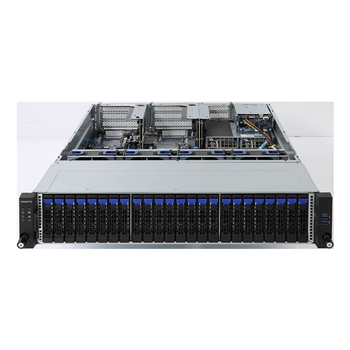 Gigabyte's new Arm servers can be managed with vCentre and Redfish

The company will soon debut in PCs thanks to Qualcomm and Microsoft’s collaboration on always-connected devices running Windows 10.

But Arm is nowhere in the data centre, despite its designs offering many-core products that offer plenty of processing grunt, sip electricity and should in theory allow for dense and cool designs.

The fact that Linux runs happily on Arm also makes it a seemingly attractive platform.

A few vendors have made servers using Arm silicon and some minor clouds have run up a rack or two to see if customers care. But Intel’s Xeon continues to dominate the data centre and while AMD is making inroads it’s doing so using the same instruction set. The Arm alternative just isn’t happening.

But last week that may have started to change thanks to Taiwanese company Gigabyte, best known for motherboards and gaming products, which last week introduced a pair of Arm-powered servers.

The machines use ThunderX2 CPUS from a company called Cavium that’s owned by component-maker extraordinaire Marvell.

The ThunderX2 is quite a beast: it offers up to 32 cores at four threads per core, all at 2.5Ghz bursting to 3.0 GHz. It has all the I/O options anyone could want. In Gigabyte’s new servers it can address 4TB of RAM.

But the notable thing about Gigabyte’s new servers is not that they’re impressively fast and look capable of doing all the things enterprise users need a server to do.

Instead it’s the software they work with that matters, namely VMware’s vCenter and the Desktop Management Task Force’s Redfish management standard.

Working with those tools means Gigabyte’s servers will be manageable with the tools and processes many organisations already use.

The servers will still be a silo - VMware can only run VMs on x86 silicon – but at least the servers won’t require a new set of tools to adopt. Or to experiment with.

That’s a small-but-important step towards opening minds to the possibilities on non-x86 servers.

Gigabyte doesn’t expect mainstream users will rush to its new products, instead recognizing that telcos, hyperscale operations and high-performance computing users are most likely to be interested in integrating what remains an exotic proposition.

But by adding mainstream tooling, Gigabyte’s also made it possible for mainstream users to at least consider a dalliance. And that may be enough to set the Arm server ecosystem snowballing.