No happy returns after myGov outage 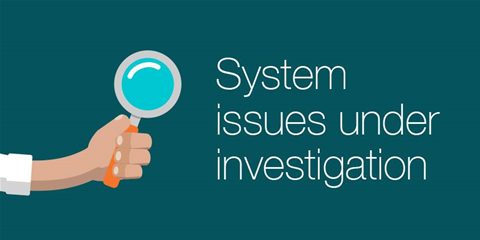 iTnews understands that the outage commenced at around 11:30 AM on Friday.

Our own attempts to access myGov produced the result depicted below. 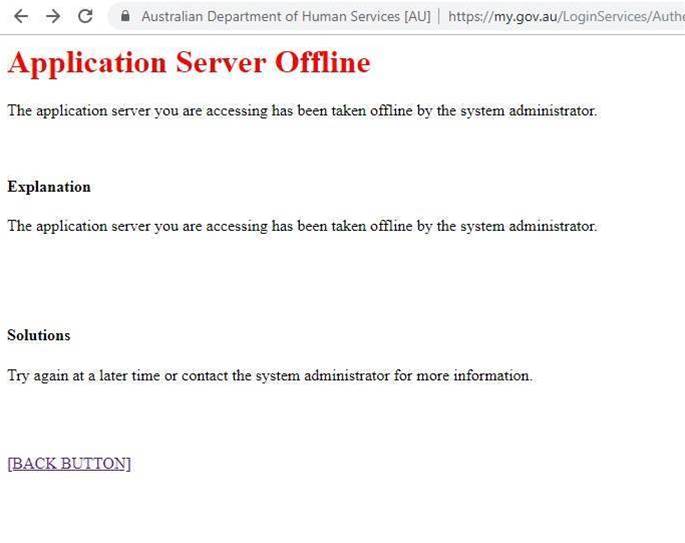 Other users have seen more verbose errors: this one mentions WebSeal, which is an IBM web server product.

lol the Australian government’s portal to ALL GOVERNMENT SERVICES appears to have crashed pic.twitter.com/X7fAYETp47

The Department of Human Services told iTnews "Some services, including myGov, are currently unavailable or experiencing slowness. The Department is working on the issue and apologises for the inconvenience."

But it declined to answer our questions on the cause of the outage, when services might resume, or why a SysAdmin would have taken applications servers offline.

Some of our services (incl. the portals & our online services via myGov) are currently unavailable or experiencing slowness. We're working on the issue & apologise for the inconvenience. Stay tuned for updates. pic.twitter.com/oTQNDfC6WP

Some people are currently having issues accessing myGov.
We are urgently investigating the issue and will keep you updated here. We apologise for any inconvenience.
Please try again later.

Early speculation about the outages has suggested that a surge of citizens filing tax returns, or the new straight-through payroll processing requirements that now impact many more Australian businesses, could be the source of the issues. But Human Services, which oversees MyGov, has not confirmed that speculation.

Human Services has sent iTnews a statement saying "We're continuing to monitor the performance of our services closely, and in the past hour have seen signs of significant improvement. Our staff are working hard to get all services restored to full capacity as quickly as possible."

The statement apologised for the mess, said the deadline for reporting employment income has been extended until 7.30PM today (so much for Friday beers) and added "While our current priority is on getting services up and running as soon as possible, we're committed to carrying out a thorough investigation into how the outage occurred."

That last point is nice to know: we'd hate to think the Department would brush this under the carpet.

The Department has now sent another statement that says the incident is over.

The difficulties "began around 9.40am and services began being progressively restored from 12.30pm," said the statement, which includes fulsome apologies from DHS General Manager Hank Jongen.

“Our staff worked hard to rectify the problem as quickly as possible. All services are now available, however a small amount of people may still experience intermittent issues logging in as we return to full capacity," says Jongen's canned quote.

“If people don’t have urgent business, we encourage them to wait until services are fully restored to allow those with urgent business to access the services they need."

The statement also confirms that "all regular payments were made overnight and were not impacted by this disruption" and offers "anyone [who] believes they have been disadvantaged by the outage ... can call us on their regular payment line to discuss their situation with a staff member."