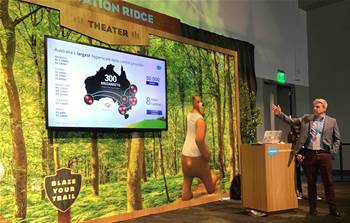 Yes, SaaS is up and running overnight. Customisation is another matter.

NextDC incurred lengthy delays and significant cost blowouts in some of its first forays with software-as-a-service.

Chief information officer Jeff Arndt told the Dreamforce 18 conference that the data centre builder experienced two rough projects with SaaS technology before it tried - and succeeded - in breaking the cycle.

The problems appeared not to relate to technology choice as much as organisational readiness and unforeseen complexities experienced during implementation.

The first of the projects - quote to cash - used Salesforce’s CPQ & billing services.

“There were three events that impacted the timeline by greater than six months or ...  additional cost to that project,” Arndt said.

In addition, it took NextDC 36 months to realise the value from its initial investment in the Salesforce tools.

“Those of you who are already familiar with the basic terms of a SaaS contract [will know that] three years is typically the term of the contract,” Arndt said.

“So it was beyond the initial term of the first contract before we actually realised the benefit from that investment.”

Arndt said the project team “defined a very clear and crisp scope” but again ran into problems that pushed the project timeline out.

“It was 12 months before the business was able to realise or take advantage of the investment we’d made,” he said. 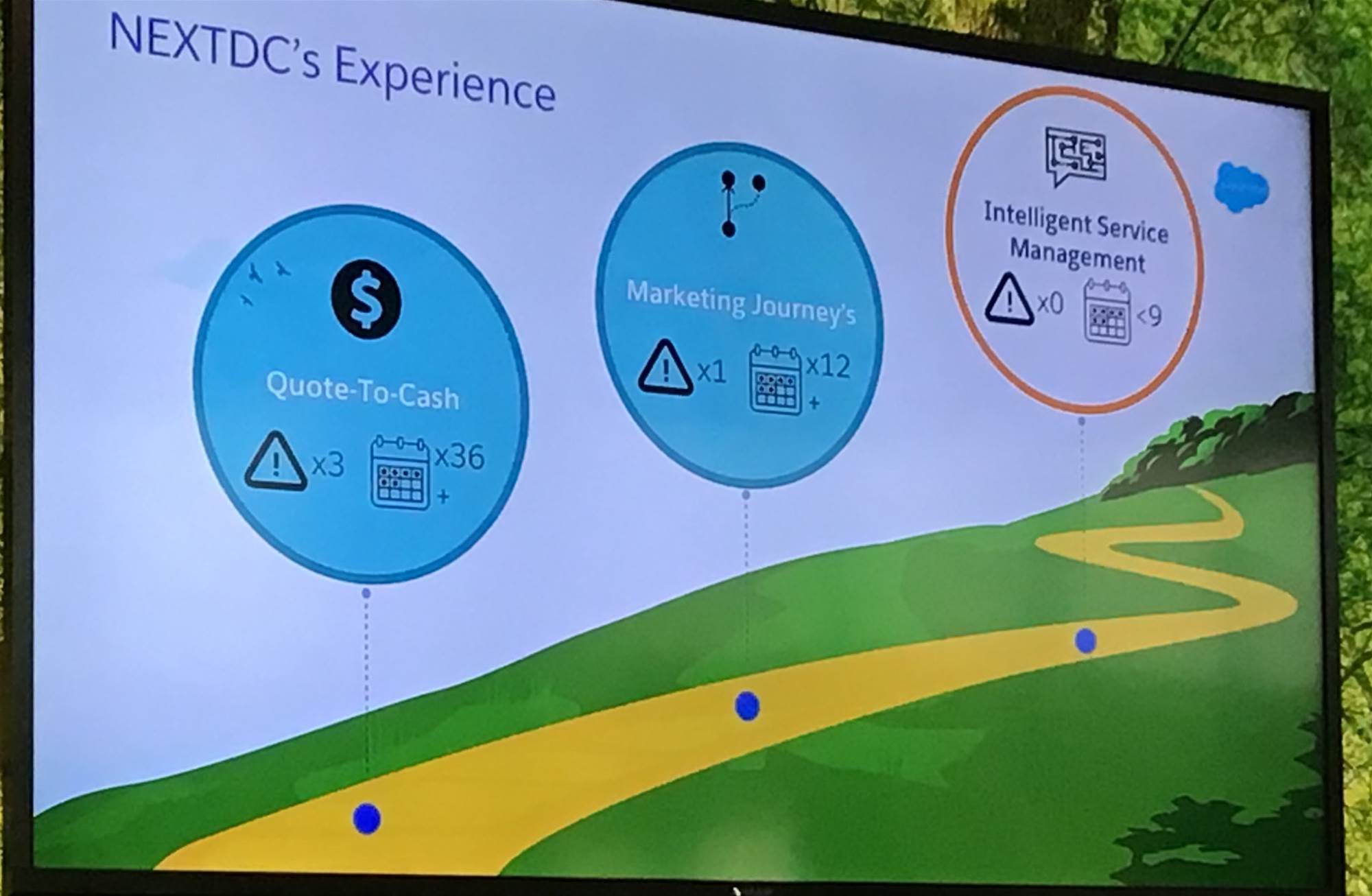 One thing the projects highlighted was there was a lot more work involved than simply standing up the SaaS platform.

“Salesforce and other ‘like’ platforms are very easy to stand up and be ready to go, but are you ready to go and able to take advantage of the technology and solutions they provide?” Arndt said.

“Effectively the problem we were experiencing is that at the point in time in which you make the purchase of that SaaS solution - most SaaS providers can stand it up in about 48 hours - but you’re not ready to take advantage of [it that quickly].”

Arndt’s experiences also differed greatly from the way in which SaaS was typically sold.

He described technology conferences as a “vacuum of perfection” where “nothing fails [and] everything demonstrated is the most unbelievable journey ever experienced.”

“It’s a very slick show and that’s effectively the mental picture that most executives have when they walk out,” Arndt said.

“They expect it as a deliverable and outcome when you make a SaaS purchase.”

Keen to reverse the company’s fortunes, Arndt used Salesforce advisory services - a business consulting arm and user community of the vendor - to help it on a third SaaS-based project.

“We started to speak to Salesforce about this trend and pattern," Arndt said.

"This isn’t something we wanted to sustain. It was something that wasn’t working for us."

The new SaaS project was “intelligent customer journeys” - an initiative to reduce “friction” when new data centre customers came onboard and had to book parking or equipment deliveries in.

“We’ve had tremendous growth in our first eight years as a company and it was about halfway through our existence that we started to get a sense in our gut I suppose from our customers that we were delivering a sub-optimal experience,” Arndt said.

NextDC commissioned an “artefact” several years ago that sought to measure the sentiment of customers as they progressed through the onboarding journey.

“The key takeaway is there wasn’t a lot of delight,” Arndt said.

“We could see the degrees of pain that we’re causing customers at different points of interaction. We knew we had to do something about it.” 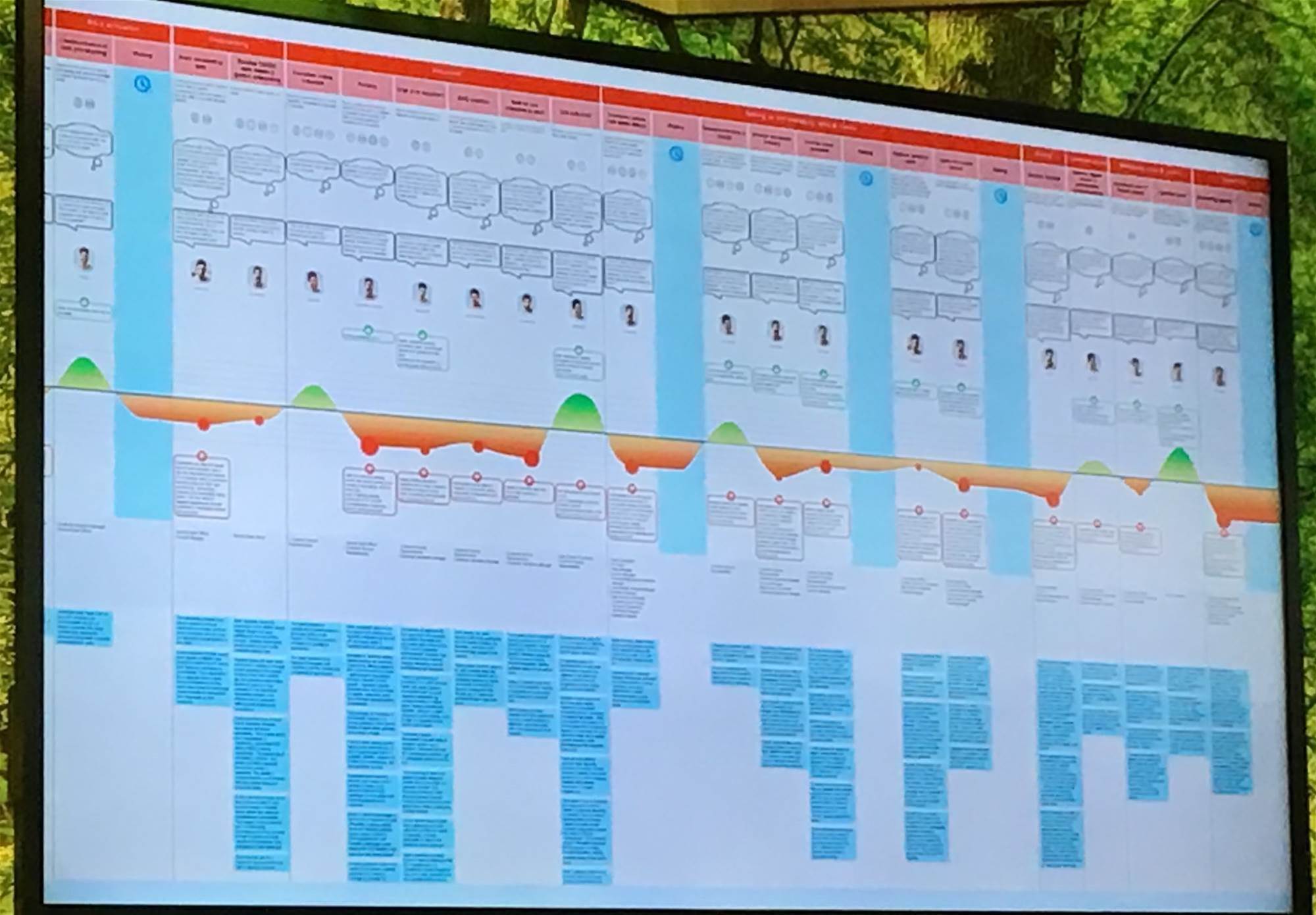 (NextDC's commissioned artefact. Above (green) and below (red) the black line denote positive and negative experiences. The size of the dot indicates the level of customer pain)

One of the things that caused pain in the backend was that every time a customer came into contact with NextDC, an enormous amount of manual effort and re-keying of data was required.

A customer might contact NextDC to arrange a parking permit or for the delivery of IT equipment into colocation facilities.

“There was no integration between our systems [for handling these jobs],” Arndt said.

“It was up to our staff to actually aggregate the information together to ultimately fulfil the customer’s request.”

The company has now designed a new, simplified customer experience that it is rolling out across its different customer journeys.

“Salesforce advisory services has really helped to prioritise those efforts to give us the maximum amount of return,” Arndt said.

“It was through the advisory services that we were able to unpack these journeys, clear out the unknowns and actually deliver on them within established timelines.

“We were able to get a return from that with zero impact in terms of timeline and budget, and we were able to deliver that return to users in less than nine months.”

Parking permits reduced from four touches to two, and requires 832 hours a year instead of 1664. Similar reductions were seen for other customer journeys.

Arndt said advisory services brought “a set of skills where they’ve worked on disastrous projects before.”

“These are people with decades of experience, with the battle scars, who’ve been through projects that have been shelved or disasters that managed their way into production,” he said.

“They help bring you back to how will your investment [in SaaS] can be best used to execute on your strategy.”

Arndt also used advisory services to “close out unknowns” when incorporating SaaS into existing IT environments.

“SaaS technology is fantastic, and obviously for the business we’re in, the more that goes into cloud the better,” he said.

“We have a cloud first approach to our business but as some of you would appreciate it’s moving data between those clouds and back into systems of record on prem that can be challenging.

“Those expert services help us to cut through the unknowns.”