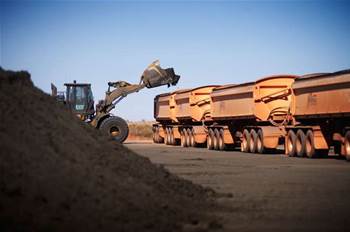 Newcrest Mining has revealed it is working with an IT budget of approximately $80 million, evenly split between operating and capital expenses.

The budget is one of a number of IT-related details that the gold miner published in presentations from an investor day held in Sydney on October 2.

The miner previously accounted for IT spending within a larger financial bucket set aside for "corporate administration", which totalled $140 million in the 2012 financial year.

Newcrest's presentation slides (pdf) position IT as facilitating a single network, dataset and reporting system across its underground and exploratory operations, hubs, pits and mills.

The company said it wanted to get "the right information to the right people at the right time to make the right decision".

It sought to promote "one way of working", collaboration and knowledge-sharing, and "fact-based decision making". It also wanted to "maximise [its] economies of scale".

Part of this is being driven through Newcrest Enterprise System Strategy (NESS), a five-year project to establish SAP as a baseline business system.

Newcrest said it had an IT team numbering about 100 people and also engaged IT contractors on a project-by-project basis.

The presentations also provided scant detail on a general three-year "improvement journey", of which the firm was in the second year (pdf).

The first year of the journey included initiatives such as Safety ReNew, which encompassed the rollout of a new online travel system and another system covering health, safety, environment and community data.

This year, the focus shifted to make a "step change improvement in production and cost", although it did not say exactly what this entailed.

In 2014 and beyond, Newcrest said it would "adopt leading systems", new technologies and encourage collaboration through a three-tier "integrated operations" model.

Newcrest declined to comment on its three-year improvement journey and integrated operations model for this story.