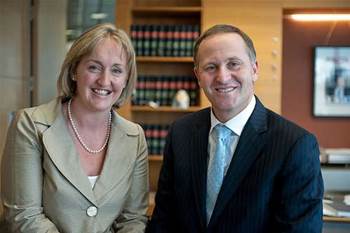 Plans on 4G, networks and TPP withheld from public view.

Incoming New Zealand IT minister Amy Adams has been accused of “treating her portfolio as if it contains state secrets” after she withheld large tracts of information from the routine release of a Ministry of Economic Development briefing paper.

The New Zealand Ministry of Economic Development prepared the briefing paper [pdf] for the newly-elected National Party minister to prepare her for her new portfolio after the National's success at the November 2011 election. Usually these briefing papers are made public shortly afterwards.

Furthermore, an entire section named “Pending decisions or actions required in the next six months” was withheld. All the withheld material was removed under the Official Information Act.

All in all, twelve items were withheld from the twenty-four page briefing.

Adams said “there are a number of reasons" why the data was withheld, including "commercial sensitivity, and information in relation to national security.”

She added that “the sector can be assured that I will be keeping them updated with the Government’s future plans and seeking their views where appropriate.”

“What can be so secret so as to take out all the decisions the Minister needs to make?” Curran asked, slamming Adams' secrecy as “farcical and extraordinarily anti-democratic.”

Curran has requested the redacted information from the Ministry of Economic Development under New Zealand’s Official Information Act. She says she’ll appeal to the Ombudsman if the request is rejected.