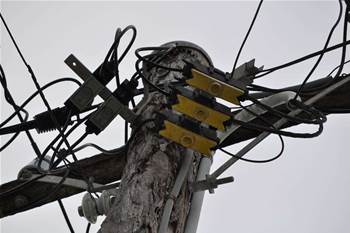 Power problems for the NBN FTTdp?

Broadband users could be seen by law as electricity suppliers.

NBN Co is concerned that up to one million users in its planned fibre-to-the-distribution point (FTTdp) rollout could fall afoul of Australia's electricity laws due to the way the network equipment is powered.

The network builder’s power program national manager, Scott Harvey, has written to the Australian Energy Regulator (AER) over fears that FTTdp end users could be seen as operating an “electricity distribution service” under Australian law.

At issue is that the cabinet housing NBN Co’s FTTdp equipment in the street – known as a distribution point unit (DPU) – is reverse-powered with electricity from customers’ premises.

A reverse power unit (RPU) is plugged into a power socket in the end users’ premises, which draws electricity and supplies it back to the DPU via the home’s copper lead-in wiring (which is also used to supply broadband).

While NBN Co has previously praised this feature for “removing a major cost to NBN”, the network builder is now fearful of the red tape cost it could impose on end users.

Under national electricity laws, “anyone who supplies electricity to another person over a private network of any kind is providing an electricity distribution service”, according to the AER.

The AER is currently consulting over exemptions to this rule.

Although there are proposed exemptions on the table that the AER has advised “should” protect the FTTdp rollout, NBN Co is seeking a specific rule to make sure.

“NBN is very keen to ensure that any potential regulatory risks to end users, arising from the use of [FTTdp] technology, are proactively addressed,” Harvey said.

Without a specific exemption, NBN Co said end users of FTTdp services could face “administrative complexity” to the point that it “prejudiced the cost effective and efficient role [sic] out of FTTdp services to large sections of the community”.

NBN Co has earmarked 700,000 premises in the Optus HFC footprint to receive an FTTdp connection.

Trials are underway with deployment expected sometime next year.