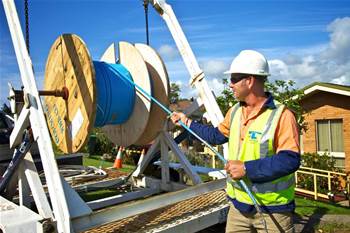 NBN Co is developing a ‘virtual network-to-network interface’ product that it claims will open new wholesale options for retail service providers (RSPs) wanting to connect to its network.

NNI Link addresses the widespread concern that large telcos are dominating the NBN landscape because they alone can afford NNI connections to most or all of NBN Co's 121 points of interconnect (PoIs).

In areas where they have no NNI of their own, RSPs typically buy NBN and related services from larger telcos in aggregated service bundles.

NNI Link would allow a large operator - or a coalition of smaller operators - to buy wholesale connectivity directly from NBN Co.

“The NNI Link product provides for a variation of the wholesale aggregator model, offering more options for wholesaling a service over NBN, and therefore more options for the purchase of resold services by RSPs,” NBN Co said.

“It is a virtual NNI so that an RSP who doesn’t have a physical connection to the PoI can still connect to that PoI via a wholesale aggregator, but buy their CVC and AVC directly from NBN Co.

"The idea is to enable multiple RSPs to be able to share physical NNI ports, so that, for example, Vocus could buy a large NNI, and then allow Vodafone to place their CVCs on that NNI without having to get their own NNI in the PoI.

"This is meant to make it much easier for our aggregators to wholesale nbn interconnection services, thereby helping to solve the 121 PoI issue."

iTnews understands NNI Link is still largely in planning stages, and that NBN Co will refine the construct with the industry and regulators.

No timeline has been placed on its launch.

NBN Co has been under pressure from some parts of the market to become an aggregator in its own right to reduce the large cost burden on RSPs wanting to service customers nationally.

The high barriers to entry mean there is heavy concentration in both the NBN sub-wholesale and retail markets.

In the retail market, four providers control 87 percent of the NBN market.

Other players typically have to purchase NBN access through sub-wholesalers, and the ACCC warned last year there is evidence of problems in that market as well.

These figures led it to warn that competition in the NBN Co wholesale market “to date is not as advanced as might be expected”.

RSPs relying on sub-wholesalers may not see NBN price discounts, making it harder for them to compete with larger players that had direct relationships with NBN Co, the ACCC said.

The watchdog advised NBN Co to offer a “transitional” aggregation product that would loosen the larger companies’ grip on the wholesale market. NNI Link appears to be NBN Co's answer.

"To the extent that the ACCC has identified that the markets for wholesale aggregation services and/or backhaul are not functioning efficiently or competitively it is appropriate for the ACCC to use its powers to address the issue, rather than proposing that a regulated entity should seek to enter an adjacent market on a temporary basis without any consideration of the commercial viability for the entity of doing so," NBN Co said.

The NBN has long faced problems over the decision to configure the network with 121 PoIs instead of concentrating a smaller number in easier-to-reach capital cities.

This is because the high cost of backhaul – particularly in regional areas – favours incumbent network operators and has proven to be financially prohibitive for many smaller and regional RSPs.

It's unclear how the NNI Link product will be received by RSPs and sub-wholesalers that have made their own investments in physical NNI connections.

All are against the ACCC regulating further in the space.

Telstra has indicated that it “does not consider that regulatory intervention in any form is appropriate in markets which are still developing”.

“The more the NBN creeps into markets, the less natural the economics of the industry," TPG warned.

Those outside that group are more receptive.

MNF Group said “urgent action will be required” given the NBN’s advanced progress, noting that “to date there has been little headway” in developing commercially beneficial aggregation services.

MacTel is also continuing to seek changes “without delay” to NBN’s wholesale aggregation policies, listing the issue as its highest priority and arguing that the current model made it “neither economic or practical for RSPs to provide services to end customers with multiple geographic locations, especially where some such locations are in regional areas.”