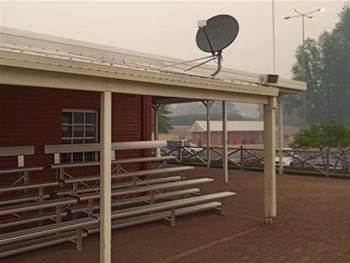 Following its response to bushfire crisis.

NBN Co is set to use its response to Australia’s bushfire crisis to create a formal product offering that can offer affected areas “interim” internet services delivered via the Sky Muster satellites.

The company said it had “been approached to develop and make available to its customers an interim service” that can be stood up during “disaster events”.

It defines a disaster event as “a sudden, calamitous event that seriously disrupts the functioning of a community or society and causes human, material, and economic or environmental losses that exceed the community's or society's ability to cope using its own resources.”

The first version of this product was likely put together in NBN Co’s response to the bushfire crisis in NSW and Victoria over the Christmas and New Year periods.

It now appears that these arrangements will be made into a formal product offering available for future disasters.

“Over the past few months, severe bushfires across many parts of Australia have caused unprecedented impact, for example by burning out huge tracts of land, forcing many individuals from their homes and damaging and/or rendering inoperable key infrastructure, including fixed and mobile communications equipment.

“The bushfires have also placed a huge strain on emergency services, as well as affecting critical infrastructure suppliers such as nbn and its customers.

“NBN Co has been approached to develop and make available to its customers an interim service ... to support people, emergency services, businesses and communities during such emergencies until normal services are restored.”

NBN Co was involved in a network resiliency discussion with other telcos and government convened in the wake of the bushfires.

NBN Co said the disaster service would be offered via retail service providers.

Test locations will be determined in collaboration with emergency services organisations.

"The NBN disaster service test is expected to commence on or about February 2020 and may be operational at specific locations for a period of approximately three weeks or more," an NBN Co spokesperson told iTnews.

"NBN Co is currently assisting in the provision of free wi-fi services at approximately 23 evacuation centres where NBN Sky Muster equipment has been installed, but further requirements beyond current active centres may emerge as the bushfire season continues or as a consequence of the significant rainfall occurring in some areas of Australia."

The service will come with a satellite dish, wi-fi and uninterruptable power supply (UPS).