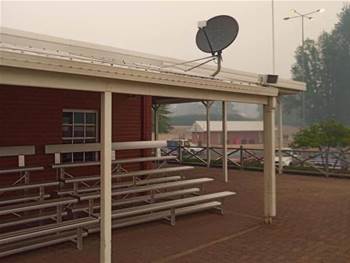 The network builder has also sent at least one of its Road Muster trucks to sites where it has been unable to install satellite equipment.

“We have now installed Sky Muster satellite dishes at 12 evacuation centres in NSW and VIC which are currently offering free wifi,” NBN Co said in a Facebook post.

“Additional services will be installed at five new locations [Monday].”

Telstra also ramped up temporary connectivity efforts in the wake of the bushfires, opening its payphones nationally to free calls and use of the Telstra Air wifi network.

“We will also be allowing free use of the Telstra Air wifi network at locations where payphones are equipped to provide this.

“As part of our existing disaster assistance packages for Queensland, New South Wales, Victoria and South Australia, we are already providing free calling on our payphones and free use of our Telstra Air network.

“However, given the scale of the emergency we’ve made the decision to extend this across the country allowing all Australians to keep in touch with family and friends.”

Penn said Telstra teams were “continuing to work around the clock with emergency services to access infrastructure in order to get services back online.”

“However, as I have said previously, this may take time given a lot of these areas are still inaccessible,” he said.

“Our telecommunications operators are working to fix network outages as soon and safely as possible,” he said in a statement.

“I commend the network operators’ efforts in responding, which has included deploying temporary facilities to restore communications services for impacted communities, particularly those that are isolated.

“Many of the outages are due to power supplies being cut off, and in some cases are the direct impact of fire on network infrastructure. The current fire situations across Australia have made access difficult and unsafe at some sites to assess and restore services.

“As and when it is safe for technicians to access infrastructure sites, restoration work is getting underway. The extent of fire impact to power and communications infrastructure in some regions means work to repair and rebuild will be ongoing.”

Fletcher said Telstra had also deployed a satellite cell on wheels in Mallacoota and a cell on wheels to Corryong in Victoria “to support emergency services operational communications”.

He also said Telstra had set up charging stations and hotspots and “distributed prepaid SIM cards at a number of evacuation centres across NSW and Victoria.”

The Internet Association of Australia is also offering a range of networking equipment, data centre space and other services to affected members.