NBN Co takes HFC up to 984 Mbps in lab trials 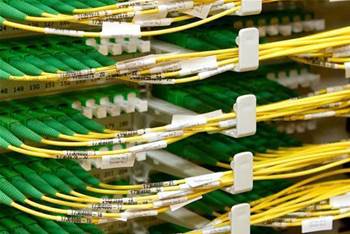 The company used a current DOCSIS 3.1 network termination device (NTD) – which it started deploying in the field back in January – at a HFC outside plant lab, which is housed at the Technical Aggregation Node and Development (TAND) facility in Nunawading, about 18km east of Melbourne’s CBD.

This was connected to a DOCSIS 3.1 capable cable modem termination system (CMTS) based at NBN Co’s National Test Facility (NTF) in Docklands, near the CBD.

Spectrum analysers and traffic generators were used at both ends to simulate downstream and upstream traffic.

It is understood that for the downstream portion, DOCSIS 3.1 was configured using a 192 MHz orthogonal frequency-division multiplexing (OFDM) block.

OFDM is a new introduction to the DOCSIS 3.1 specification. It promises better transmission efficiency “by effectively allowing all end users to access the whole road rather than being restricted to a limited number of lanes”, according to research commissioned by NBN Co last year.

The service configured in the lab used a service profile of 1000 Mbps down and 100 Mbps up. There is a 1Gbps physical port limit on the DOCSIS 3.1 HFC cable modem.

The test is understood to have achieved around 984 Mbps down and 100 Mbps up. Further lab tests are scheduled to run in August.

NBN Co said in a statement that “in-field trials” of DOCSIS 3.1 could occur as early as December this year, “ahead of a potential commercial launch of DOCSIS 3.1 services in 2018.”

CEO Bill Morrow used senate estimates a week ago to outline his expectations that roughly half of the NBN network would be capable of supporting gigabit speeds. This accounts for the FTTP, HFC and future FTTC portions.

But NBN Co has consistently said it does not currently see a demand for 1 Gbps services.

While it is technically feasible to offer 1 Gbps speeds over the FTTP network already, no RSPs have launched commercial residential services to date. Launtel launched a business service over the NBN last week.