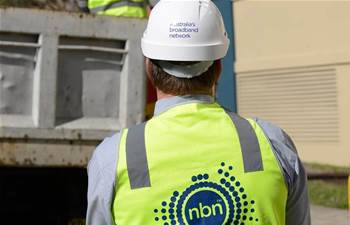 But later-than-expected takings could reach $500m.

NBN Co will take an immediate $50 million revenue hit from its HFC delay in the six months to June 30, while delayed takings could top $500 million.

Though the delay is projected to last from six to nine months, NBN Co only provided projections for a six month delay.

“It depends obviously on the length of time of pause but if you take a six month pause … for the period to 30 June you’re talking around $50 million [revenue impact],” Rue said.

That $50 million is largely money that would now end up with the likes of Telstra and Optus, which run customers’ existing internet services and will continue to maintain those connections while the NBN HFC network is unfit for purpose.

However, the company - like Telstra - is likely facing a higher amount of “delayed” revenue - that is, money it will take but will be recognised on its books later than expected - if problems are not resolved within the minimum six-month window.

“The actual answer to that question is well and truly being worked through, but will take probably several months for the team to come up with a new profile of build and when those premises will be ready for service.”

There are a large number of variables involved that will affect the overall financial impact of the HFC delay, including how quickly NBN Co can move, “access the skilled technicians we require”, and integrate learnings into the remaining part of the HFC build, CEO Bill Morrow said.

But he and Rue were keen to note that the company would still get most of the revenue it had planned from HFC - minus the $50 million - and that the HFC delay would not cause a financial overrun on the entire project.

“We have contingency money set aside for these types of events and we are confident in the $49 billion peak funding forecast set out in our most recent corporate plan,” Morrow said.

“The net effect on the $49 billion plan is zero effectively because of our contingency fund,” Rue added.

Morrow said NBN Co had "a plan on how to get to cashflow positive by only spending $47 billion, but we have uncertainty we know we still face in front of us".

“When this [corporate] plan was written in June of last year, we knew that we would be facing things that we didn’t know," he said.

“We were still in uncharted territory to a certain degree so we put $2 billion aside. So instead of a $47 billion we said we would commit to $49 billion and we would have this $2 billion contingency to be able to deal with the unknowns.

“The HFC example is just one of the unknowns, so we slide that over, and we maintain our budget.”

Rue said the HFC remediation work performed during the delay, however, would have to be accounted for differently than NBN Co had planned.

“The remediation that we’re now going to do before we release premises ready to connect will be done in advance,” he said.

“In the past, most of those costs would have been recognised as operating costs.

“[But] I think it will be appropriate to include those costs as capital expenditure costs."

The immediate effect of that would be an increase in the cost-per-premises (CPP) number for HFC, “the quantum of which I can’t tell you today,” Rue said.

Morrow claimed NBN Co had been caught off-guard by the level of remediation required on the HFC network.

“We knew that there would be some level of remediation that was required,” he said.

“We did not anticipate that it would be this much remediation that was necessary otherwise we would have done a far different job before we released it for the customers to connect to.

“It’s a calculated decision that was made to deploy this technology.”

It's not just NBN Co and Telstra that are experiencing financial problems due to the HFC delay; some retailers are also expecting to feel the pinch.

Aussie Broadband, for example, is expecting a 20 percent drop in its sales because it cannot sell new HFC connections.