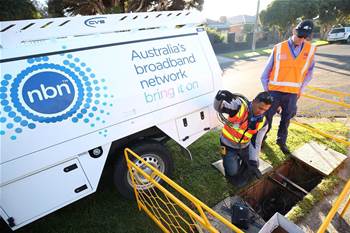 As industry unites a second time in its demand for change.

NBN Co has posted a spirited defence of its controversial bandwidth charge and of its incurred costs to date, as the top five internet providers - Telstra, Optus, Aussie Broadband, TPG Telecom and Vocus - unite to demand action.

The first formal responses following a June ‘roundtable’ intended to kickstart a conversation on NBN Co’s future price and non-price terms shows a chasm between NBN Co and the industry’s thinking.

Importantly, just as they did last month, all five top retail service providers (RSPs), representing some 96 percent of fixed-line users, formally united on the issues of the future of the connectivity virtual circuit (CVC) charge and the cost of the NBN.

In the past, most - if not all - RSPs broadly agreed on these issues but took the fight individually to NBN Co. This time, however, they have united to offer a single joint view.

All five RSPs want to pay a flat wholesale price per NBN service, instead of the current construct that has them paying a variable bandwidth charge called connectivity virtual circuit (CVC) whenever demand for the internet goes up.

“We strongly believe that any conversation related to a future wholesale pricing model must be approached with the starting presumption that [flat] wholesale pricing is the default and preferred position,” the RSPs said. [pdf]

Indeed, its default position so far appears more aimed at keeping the current structure intact, a view that will only be reinforced by its fresh defence of CVC, its inability to see any “alternative”, and reluctance to put any “definitive” offers on the table.

NBN Co makes clear its openness to CVC-less price models is heavily conditional on its ability to claw back its costs, hit revenue targets and meet government policy objectives.

RSPs argue none of this is really the point of having an NBN.

“The focus for the past decade has been on NBN Co’s cash flows, with the consequence of NBN Co’s prices being too high, artificially restricting customers’ use of the NBN,” they say.

The network operator defended that decision: “Contrary to initial feedback, the Accenture paper … was not intended to dismiss all services [being] offered under an [flat price] construct) as a viable alternative,” NBN Co said. [pdf]

“Rather, it was intended to provide greater insight into the potential issues associated with this construct - which warrant detailed analysis and consideration given this construct represents the greatest departure from the existing pricing construct.”

RSPs say the Accenture report “contradicts the near industry consensus that customers will be better off with wholesale prices that do not include a variable charge”.

In its new submission, NBN Co offers a range of arguments as to why flat pricing may not work out.

NBN Co lauded “the malleability of the initial product set”.

“The core CVC/AVC construct and range of speed tiers included in the SAU were designed to enable RSPs to provide a diverse range of retail offerings at the same time as enabling NBN Co to recover the costs of the network over time under a ‘user-pays’ model,” NBN Co said.

“By allowing RSPs to determine the level of CVC provisioning – and associated cost – the wholesale product and pricing construct enables RSPs to provide services with varied capacity commitments and at different retail price points.”

NBN Co argues that CVC is a lever for RSPs to “control of the level of operational quality and performance of their services” - effectively a benefit rather than a curse.

“The question, we believe, is whether there is an alternative that also gives RSPs the necessary control, in a way that is efficiently priced and less complex to manage for all parties,” it said.

NBN Co warned that ACCC-suggested ways to enable differentiation under a flat price model - such as quality-of-service add-ons - would lead to higher retail costs.

“Not only would changes to the existing product construct involve significant time and complexity, therefore delaying the proposed benefits of increased price certainty sought by RSPs, but such changes will likely drive greater costs into NBN – which costs would then need to be recovered through increased prices which we understand is counter to RSPs concerns,” NBN Co countered.

NBN Co also argued the CVC construct is a fairer way to recover costs than a flat price model.

“For example, if NBN Co is required to upgrade capacity at a particular POI [point of interconnect] today, and this upgrade is driven by RSPs with higher capacity requirements per user, then those RSPs will have contributed proportionately through increased CVC charges at the relevant POI,” it argued.

“In a [flat price]-only world, however, NBN Co’s ability to recover this direct contribution to network upgrade costs is not possible - and all upgrade costs are required to be borne by all RSPs through average prices that account for nationwide network investments.”

NBN Co argues “low demand users” and “low demand RSPs” will be “required to bear a greater proportion of network upgrade costs” - a move designed to cast doubts over the motivations of the larger RSPs.

A showdown on the cost of the NBN has been on the cards for some time, and it is clear this issue is now coming to a head.

NBN Co consistently argues that its costs are “prudent” and “efficient”. It also said it is “currently under-recovering its prudently incurred costs” and “charging well below its regulated price points because of its incentives to enable sustainable retail operations and to promote the efficient use of its network.”

NBN Co’s endless stream of discounts mean it doesn’t ever charge the maximum regulated price for an NBN service.

However, even NBN Co notes that “the current price construct ... is deliberate in providing the opportunity to improve cost recovery over time”, meaning the long-term intention is for continuous price rises.

RSPs argue that NBN Co’s historical and future costs need to be reviewed and independently vetted to ensure that the company is not allowed to recover “economically inefficient” costs.

“No commercial enterprise is guaranteed the recovery of inefficient costs or accumulated losses,” they say.

TPG Telecom is more blunt: “NBN Co’s pricing philosophy is that as usage of the NBN increases year on year, NBN Co’s revenues (and hence RSP costs) should grow in lockstep.

“However, RSPs are not seeing a commensurate increase in their customers’ willingness to pay.

“This means that inefficiencies occur as NBN Co’s price increases are likely to price some customers out of the market.”