Construction to start in one-third of footprint by end of year.

NBN Co will begin its rollout of fibre-to-the-curb (FTTC) in the back half of this year to almost one-third of premises in the current planned footprint.

The company today said it had shortlisted 321,400 of the 1 million premises in the planned FTTC footprint to commence construction between now and December.

FTTC - also known as fibre to the distribution point (FTTdp) - brings fibre up to the driveway of homes and businesses, promising faster speeds than fibre to the node (FTTN). It is replacing FTTN in a number of areas across Australia.

NBN Co said back in February that Coburg North in Melbourne would act as the test site for FTTC construction as well as retail services.

Work officially began on the FTTC network today in Coburg.

“The trial is designed to evaluate the construction and installation of its deployment ahead of the nationwide build that will commence in the coming months,” NBN Co said in a statement.

NBN Co also slightly revised projections for when the first commercial services on FTTC are expected to be available; the timeline of the “first half of 2018” given in February is now “mid-2018”.

Clarification has been sought from NBN Co.

Many of the first suburbs in line for FTTC construction are new; 50 out of the 138 suburbs listed by NBN Co today were not previously known to be part of the FTTC rollout, and many of them do not yet appear as such on NBN Co’s online maps.

This is likely to point to even more FTTN and HFC areas being flipped over to FTTC than previously thought.

In Queensland, Albion, Aspley, Bundamba, Charlotte, Rothwell, Salisbury, Ashmore and Inglewood are all new to the FTTC rollout.

The full list of premises where FTTC construction is set to commence in the next six months is: 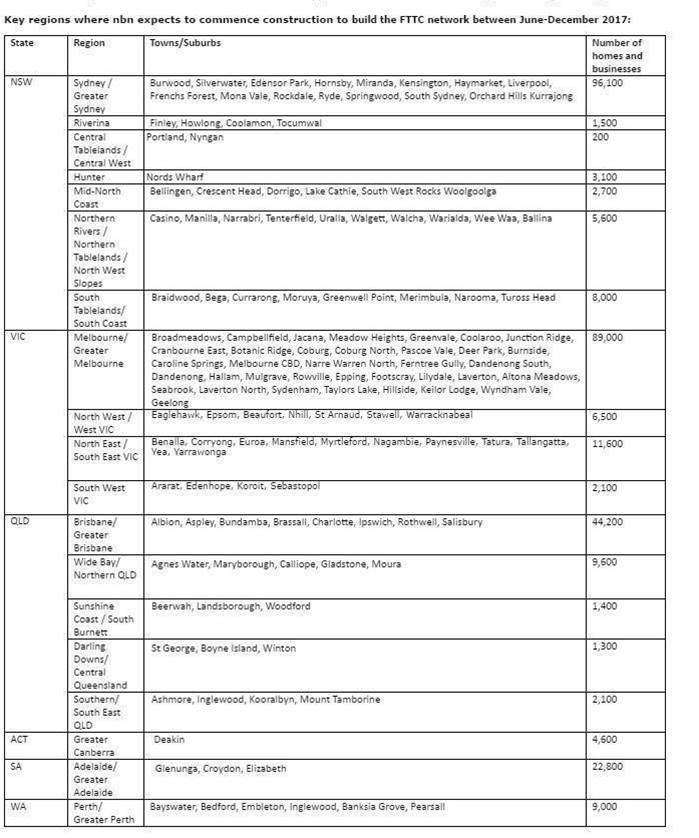