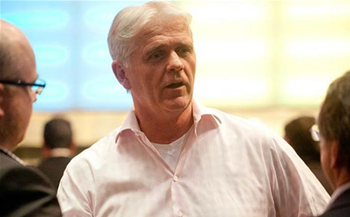 "No sympathy" for newcomer's complaints.

Update 15/8: Morrow has denied singling out Vodafone as a seeker of wholesale price cuts. He did not clarify who he was referring to, according to a news report.

Morrow's uncut quote from the video is as follows: "One of the key callouts of this financial model that was put together is that it would create this vibrant retail market where there's a low barrier to entry to come in, where anybody can come in and resell broadband services and capture a number of our homes out there as far as us being their customers. That's great news. In fact it's worked so well there's well over 100 different companies that sell into Melbourne and sell into Sydney alone, and we see new ones coming in all the time. Big household brand names like Foxtel and Vodafone coming in. But what's really important is that these companies, they have known for some time what our prices are, what the cost is going to be to be able to sell you or I a particular service."

Morrow finally bit back after a months-long campaign by Vodafone targeting reductions in NBN Co’s prices, despite the mobile telco not having any NBN retail services in market.

Vodafone - which Morrow led before joining NBN Co three years ago - first outlined its objections to the wholesale price construct in a detailed submission to an NBN Co-led consultation in June.

The release of the document - which called for “urgent action” on pricing - is likely to have irked NBN Co, which does not generally publish submissions to its consultations.

“The pricing regime is the central reason why NBN could fail to achieve its full potential,” Vodafone said.

“It is undermining the NBN’s long term viability. Significant change must occur now.”

Vodafone chief Inaki Berroeta then told an American Chamber of Commerce event late last week that he believed NBN Co had “room to maneuver” on its prices and could cut its connectivity virtual circuit (CVC) backhaul charge by as much as half without damaging the project’s economics.

That appears to have hit a raw nerve with Morrow, who warned Vodafone in no uncertain terms to accept the price structure or exit the NBN.

He said “big household names” like Foxtel and Vodafone were signing on as NBN retail service providers “all the time”.

“What’s really important is that these companies have known for some time what our prices are and what the cost is going to be to sell you or I a particular service,” Morrow said.

“So when they start talking before they even get here about reducing our prices, I don’t have any sympathy with them.

“We have plenty of retailers already selling the product and you can have too much competition that it becomes unhealthy.

“So if any one of these new entry brands are coming in, be aware of the prices, and if you don’t think that you can make money on that, they should not come because it would be more destructive than beneficial to the industry.”

A Vodafone spokesperson told iTnews it wanted to see a "rebalancing of the CVC/AVC model" and that it "did not advocate a price discount".

"Our submission [to the NBN Co consultation] proposes a rebalance by halving the CVC price but also a corresponding increase in the AVC price," the spokesperson said.

"We advocate a pricing restructure that would maintain NBN Co’s ARPU [average revenue per user."

The spokesperson added that Vodafone's proposal would mean "no net reduction" in NBN Co's takings.

NBN Co and the government have been under pressure over the past month to alter wholesale prices to encourage ISPs to buy more backhaul and therefore improve the speed and performance of end user services at peak times.

The network builder has previously lowered its backhaul prices, resulting this week in a modest improvement in the amount being purchased.

However, it is somewhat limited in how much further it can go with discounts as backhaul is one of the main ways it had hoped to generate revenue and a commercial return on the government’s investment in the project.

NBN Co also believes its model isn’t entirely to blame; the company last month said a price war and margin squeeze meant ISPs were not buying enough backhaul capacity, and that wholesale prices were not an impediment.